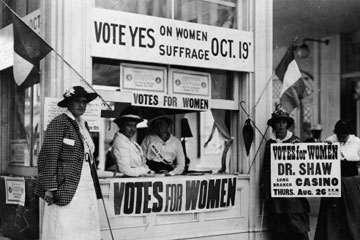 American women won the right to vote in 1920 and now vote in greater numbers than men.
FPG/Getty Images

A hallmark of the American political process is the secret ballot system, widely adopted for the first time in 1892 when Grover Cleveland was voted into office for the second -- but not consecutive -- time [source: Encyclopedia Britannica]. Four years earlier, Cleveland, a Democrat, had been on the losing end of widespread voting fraud orchestrated by Republicans, which had overtaken many state and local elections and nudged his rival, Benjamin Harrison, into the White House [source: Ackerman]. At that time, the rationale for people checking "yes" or "no" for a particular politico may very well have boiled down to whoever gave them the highest buck for their ballot.

Although state-level voting laws and their secret ballot systems have effectively eliminated quick paydays as a motivation for voting, political scientists, pollsters and pundits continually puzzle over how adults to decide to cast their civically sacred ballots. Certainly, in the United States, whether voters are Republican or Democrat is an easy way to predict candidate affiliations. Personal stances on electoral issues, such as government-funded healthcare and abortion access, and candidate likeability and basic appeal are other, often-cited influential factors [source: Wolfe]. And then, in 1980, another seemingly decisive factor emerged in presidential exit polling data: gender.

Six decades before Ronald Reagan switched residences from Hollywood to 1600 Pennsylvania Avenue, the 19th Amendment was ratified, granting American women the right to vote in 1920. From the get-go, newly empowered, socially active women supported "maternalist" ballot initiatives undergirded by a Progressive Era ethos of reform; provisions for the poor, elderly and children consistently ranked at the top of their government priorities -- and still do for many women [source: Manza and Brooks]. Indeed, some men at the time feared that the new and sizeable voting bloc would upend the political status quo and force the government to take a more hands-on approach with its people. But it wasn't until women entered the workforce en masse in the 1970s, prior to Reagan's run for office, that this statistical majority of the American electorate really began flexing its muscles more noticeably at polling stations. 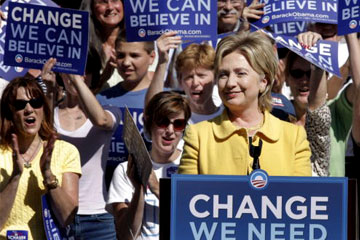 With propositions including cuts to welfare and blocking passage of the Equal Rights Amendment, which sought to constitutionally guarantee women equal rights as men under any federal, state and local law, not all of Ronald Reagan's platforms sat well with American women [source: Copeland]. As a result, enough female voters fled Republican ranks in the 1980 election to produce an 8-percentage point gap between men and women who supported Reagan [source: Center for American Women and Politics]. Of course, Reagan still won then -- and again in 1984 -- but that election has proven pivotal nevertheless, since that slight but persistent red and blue split between male and female voters, respectively, still hasn't closed. For a more recent example, take the 2008 presidential election. Among women, Democrat Barack Obama handily beat his Republican opponent John McCain with 56 percent of the vote. Among men, however, it was a much closer race; Obama eked out just 49 percent of the male vote [source: Center for American Women and Politics].

Not only do today's women tend to side with Democratic candidates, but they also vote in greater proportions than men and from an early age. In the 2004 presidential showdown between Republican George W. Bush and Democrat John Kerry, for instance, women out-voted men in every age demographic, with 60.1 percent of total eligible female voters casting their ballots, compared to 56.3 percent of their male counterparts [source: Center for American Women in Politics]. And when they march to the polls, women bring along distinctive ideologies that drive them toward the donkey rather than the elephant.

Research suggests that population-wide gender differences in how men and women conceptualize the role of government likely contribute to these nationwide pink and blue voting trends. For instance, a 1997 study from the Center for American Women and Politics found that more women believe the federal government should function altruistically to help disenfranchised citizens, whereas men think it should take a more individualistic approach [source: Frum]. In other words, a majority of women swing more socially liberal and Democratic, while traditionally more men have favored Republican conservatism. That altruistic-versus-individualistic dichotomy is reflected in how women and men prioritize election issues as well. According to a March 2012 survey from the non-partisan Pew Research Center, women were more likely than men to support government services for the poor, tighter regulations on food production and tougher workplace safety laws [source: Pew Research Center].

But there's still plenty of nuance in these numbers. Federal policies related to healthcare, unemployment and gas prices ranked highly for both men and women voters in a recession-era 2012 election season [source: Newport]. Moreover, neither men nor women constitute monolithic voting blocs. They're more accurately described as two mega-demographics that each can be sliced and diced into discrete groups with conflicting political and social affiliations. Moreover, if candidates are hoping to woo the fairer sex in particular, a rookie mistake to make would be emphasizing so-called "women's issues" and calling it a day.

The last time that a greater proportion of American female voters opted for a Republican Presidential candidate was 1988, when a single percentage point separated the women's vote for George H.W. Bush versus the defeated Michael Dukakis. Since then, the following Democratic presidential candidates have garnered a majority of the female vote: 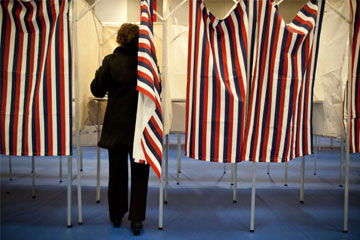 Can You Ignore a Subpoena?
How Did the U.S. Look Before the EPA?
'Lazy Americans': Is U.S. Voter Turnout Really Too Low?