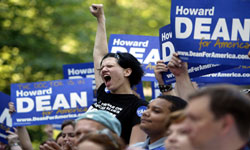 A supporter for Democratic presidential candidate Howard Dean cheers for him in Falls Church, Va., during the first stop of his "Sleepless Summer Tour" in 2003.
Mario Tama/Getty Images

Some presidential campaigns fizzle with a whimper — e.g. Jack Kemp (1988), Wesley Clark (2004) and Fred Thompson (2008) — and some go out with a cringe-inducing bang. The 2012 political season saw its share of bottle-rocket candidates like Herman Cain, Michelle Bachmann and Newt Gingrich, who shot to the top of the polls with fiery confidence and then exploded amid colorful comments and personal controversies.

But 2012 was hardly the first political season to witness the sudden collapse of a can't-lose campaign. We proudly present our list of the five most impressive presidential campaign implosions of the past century, starting with the story of a veteran politician undone by a snowflake.