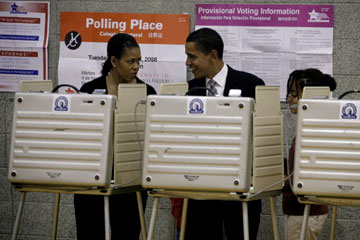 Astraphobia, or fear of lightning, might seem silly, but the odds of getting struck in your lifetime are relatively high: 1 in 10,000 [source: National Oceanic and Atmospheric Administration]. Selachophobia, by comparison, is far more unfounded, since the chances of becoming shark bait at the beach are much lower: roughly 1 in 11.5 million [source: Reilly]. But statistically speaking, at least, neither of those phobias is nearly as irrational as the act of voting.

In 2008, a trio of number crunchers at the National Bureau of Economic Research calculated the probability of a single vote in a presidential election actually making a difference and determining who ends up in office. The not-so-civically-inspiring results? One in 60 million [source: Gelman, Silver and Edlin]. On a slightly brighter note, citizens of political swing states New Mexico, Virginia, New Hampshire and Colorado have more power at the polls, with a 1 in 10 million probability of swaying outcomes, which is far from a sure thing, but at least beats the risk of encountering Jaws [source: Rampell].

Nevertheless, more Americans voted in the 2008 presidential election than ever before [source: CBS News]. Bucking statistical irrationality, a politically motley mob of 131 million adults exercised their democratic right to toss in their two cents on who ought to govern the country. Possibly due to the presence of a black candidate, minority voters turned out in especially high numbers that year, with roughly 5 million more heading to polling places than during the 2004 election. Older constituents between 65 and 75 years old also broke previous voting records [source: Kronholtz].

It isn't a big surprise that those senior citizens in 2008 really rocked the vote, though. People over 65 years old are the most likely age demographic to vote, probably because crucial benefits like Social Security and Medicaid are managed by the government [source: Brandon]. Regular churchgoers, married couples and even people with especially active sweat glands are also more apt to vote, according to numerous studies [source: Lawrence]. General correlations aside, however, political scientists, psychologists and statisticians are still left scratching their heads as to exactly why those elderly, religious, palm-sweating groups are internally motivated to head to the polls. 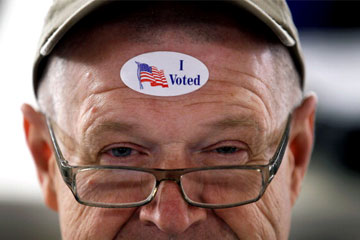 Author's Note: Why do people vote?

I am, admittedly, a presidential election junkie. I tune in to the debates, listen to the pundits and their projections and watch the returns roll in until every state is colored in red or blue. But I doubt that I would enjoy the process so much if I didn't vote. Once I punch my ballot and put on my "I Voted" sticker, a slight weight is lifted from my shoulders knowing that I've done everything in my democratic power to bring my desired candidate into office. But why do I feel like such a saint when my vote only has a 1 in 60 million chance of making an actual difference in a presidential election? From researching that very question, it turns out that voting is a product of sociocultural, biological and psychological factors that are far more complex than the simple act of pulling a lever or checking a box. Some people are literally hardwired to show up at polling stations, whereas others unapologetically abstain. Either way, it's incredible that for all of the time, effort and money poured into the American voting system, it remains one of the most irrational habits we maintain.