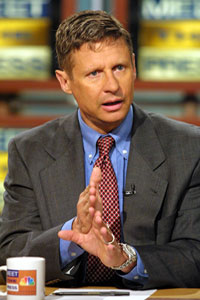 On Election Day 2012, the decision is clear: It's Barack Obama, Mitt Romney or Gary Johnson. Gary who? Gary Johnson, former governor of New Mexico and the presidential candidate of the Libertarian Party, America's third-largest political party! You are not likely to see a lot of expensive television ads for Gary Johnson. Heck, unless you live in Alaska or Montana, you might not even see a billboard. But the candidacy of Gary Johnson, and the popularity of libertarian-leaning Republican Ron Paul, exposes a growing disillusionment with the traditional Democratic and Republican party platforms.

According to 2012 polls, 30 percent of Americans define themselves as independent, belonging to neither of the two major political parties [source: Rasmussen Reports]. But how many independents are actually closet libertarians? For example, how do you respond to the following statements?

If you agree with all three of those statements, you might be a libertarian. In reality, Libertarianism is more than a list of policy statements or even a political party. It's a complex political philosophy that has evolved over thousands of years of political thought. Libertarians argue that the Founding Fathers built the United States on libertarian ideals of limited government and the God-given rights to life, liberty and the pursuit of happiness.

We'll begin our exploration of libertarianism with a look at the basic principles of the movement, starting with an unbending belief in individual freedom.