by Nathan Chandler
NEXT PAGE
Demonstrators protest outside the Hyatt Hotel where the Democratic National Committee was kicking off its summer meeting in Chicago, 2018. The demonstrators were protesting the use of superdelegates by the Democratic Party, which was one of the issues to be addressed at the meeting. Scott Olson/Getty Images

When the 2008 campaign for president began, it wasn't such a big story that there would be superdelegates at the 2008 Democratic National Convention in Denver, Colorado. After all, superdelegates have been at every convention since they were created through Democratic National Committee (DNC) rules in 1982 [source: CNN]. In previous contests, superdelegates hadn't enjoyed much of the spotlight. But as the Democratic primaries whittled down the number of competitors for the nomination, a close race emerged between Senators Hillary Clinton and Barack Obama. Even as the end of the 2008 Democratic primary calendar wound down, the two candidates were neck and neck for the Democratic Party's nomination for president of the United States. Scores of primaries and caucuses, including those on Super Tuesday – a day designed to establish a clear front-runner – produced no obvious candidate.

With the delegate counts for Clinton and Obama so close, it was thought that in the 2008 primary season, superdelegates would have a huge impact on which candidate the Democrats nominate for the run for the presidency. In the end, Obama won the nomination thanks in part to superdelegates who defected from Clinton over to his side, though he was ahead in pledged delegates as well [source: Schor and Glaister].

So, who are these superdelegates? And how do they have so much power?

Delegates won in primaries and caucuses are considered pledged voters, meant to represent the will of the people who voted for a particular candidate. At the national convention, these delegates are expected to vote for the candidate chosen by the thousands of voters they represent. This is not the case with superdelegates.

Superdelegates are simply "unpledged voters." Their vote represents their own choice, rather than the wishes of the voters, and these unpledged delegates can pledge their votes as they see fit.

Superdelegates have to consider how to use their votes carefully. They may:

The Democratic National Committee delegate selection rulebook says that pledged delegates "shall in all good conscience reflect the sentiments of those who elected them." In stark contrast, a superdelegate can also choose to vote his or her "conscience." This is one way of saying that a superdelegate may not vote the way the majority of voters do, but on the candidate he or she feels is best.

To win the 2020 Democratic Party nomination for president, a candidate has to rack up 1,991 delegates – half of the 3,979 total delegates plus 1 [source: 270 to Win]. Delegates in 2020 or any other year are won through votes from state primaries or caucuses. Generally, delegates are awarded by percentage in Democratic nominating contests; this is in contrast to some Republican contests, which are winner-take-all. So if one Democratic candidate wins 60 percent of the popular vote in a state that offers 10 delegates, for example, that candidate will win six delegates in that state. This continues state by state, and usually one candidate manages to rack up a clear majority of the delegates before the convention.

In the 2020 Democratic primary, there are about 764 superdelegates, making up around 16 percent of the delegate count for the party [source: Ballotpedia]. These superdelegates are Democratic members of Congress, high-ranking members of the Democratic Party, state governors and former presidents and vice presidents [source: Fang]. (Pledged delegates are selected at the local or state level and are usually ordinary party members who have applied and campaigned for the spots.)

Superdelegates are allowed to switch their pledges from one candidate to another at the national convention. They can also pledge and switch long before the convention. Some say this gives superdelegates undue influence on the course of primary voting behavior, and because they know this, candidates often swoon over superdelegates to curry their favor [source: Heersink]. When they do switch, it's usually to reflect the direction they see the vote going. For instance, 30 superdelegates switched from Clinton to Obama in 2008 after he had gotten a narrow lead in pledged delegates. More might have switched, but Clinton dropped out at this point.

Usually, though, superdelegates don't change their minds, even when candidates plead with them to shift their alliances, as Bernie Sanders did during the 2016 primary season [source: AP News]. That's where things often get messy.

In 2016, many superdelegates came out early in support of Hillary Clinton, a fact that caused Sanders to claim that the Democratic Party powers-that-be were manipulating the system to swap public opinion in Clinton's favor, a task made easier by the inherently confusing and messy delegate/superdelegate system. Although Clinton did win a majority of pledged delegates, Sanders and his supporters thought her early endorsements from so many superdelegates might have swayed primary voters [source: Conway].

In the wake of these conflicts, Sanders and his activists sought several rule changes to the nominating process, which were mostly rejected by the DNC. However, they did get one big change for the 2020 election – superdelegates were no longer allowed to cast their votes during the first ballot at the national convention, unless the outcome was already certain [source: 270 to Win].

So why does the Democratic Party have superdelegates? And does the Republican Party have anything equivalent? 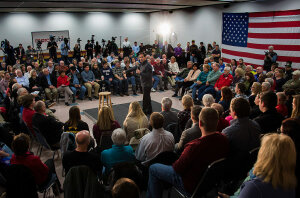