If 13 people eat at the same table, will one die before the year is over? 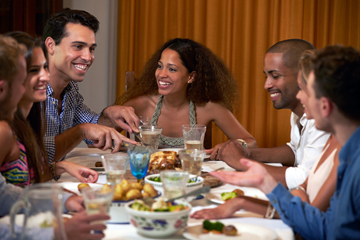 Thirteen is almost universally considered an unlucky number, so you better make sure you have the "right" number of plates in your dinner set.
monkeybusinessimages/Thinkstock

One of the most enduring superstitions, especially in North America, is triskaidekaphobia — fear of the number 13. According to author Nathaniel Lachenmeyer, the term triskaidekaphobia originated around 1910, bringing with it phobias about Friday the 13th as well as the tradition of builders skipping the 13th floor when designing buildings, in an effort to avoid bad luck. Even famous horror writer Stephen King won't stop reading a book if he is at a page whose numbers add up to 13 [source: NPR].

Some restaurants even get in on the "13 is unlucky" act. Visit some eateries in England and you'll find zero tables numbered 13 [source: Baggini]. Although some chefs admit they don't really believe in this superstition, they uphold it anyway as respect to tradition.

One of the more enduring restaurant superstitions — and at home, if you have a large enough table — is that if 13 people eat at the same table, one will die before year's end. What's behind this sometimes-impractical superstition? Several theories.

According to the Bible, the Last Supper included 13 people, one of who ultimately betrayed Jesus. Unlucky indeed. Another is a Norse legend about 12 people sharing a meal in Valhalla. A 13th person, Loki (the spirit of strife) crashed the dinner and one person ended up dead. Finally, a French theory explains that most dinner plates come in sets of 12. The thirteenth person who ends up with a mismatched plate would feel unloved, and come into bad luck [source: Romain].

However, skeptics always exist. In the 1890s, historian William Harnett Blanch founded the London Thirteen Club in an attempt to prove the number 13 (as well as other superstitions) was harmless. In the spirit of proving superstitions wrong, this club met on the 13th of every month, and defied bad luck in a humorous number of ways.

Meeting on the 13th of every month for dinner, guests sat at 13 tables with 13 place settings. To get to the club, they had to follow an undertaker under a ladder, sit at tables decorated with black cats, and spill salt before eating. Members broke mirrors, turned horseshoes upside down and crossed knives — all considered bad luck. Even breaking every superstition they could think of, only one member of the London Thirteen Club died — he failed to pay his membership dues [source: Watts]. The Thirteen Club enjoyed enough popularity to boast five U.S. Presidents as members, including Grover Cleveland, Theodore Roosevelt and William McKinley [source: Smithsonian]