Why is it bad luck to give a woman an even number of flowers? 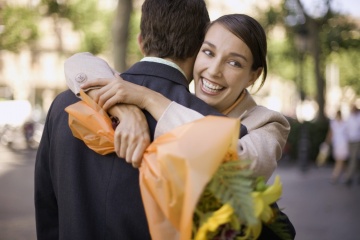 You might think you're being romantic by bring your girlfriend flowers, but the type and count of that bouquet matters.
Randy Faris/Fuse/Thinkstock

Giving flowers as a gift is a time-honored tradition. In times of celebration, sorrow, as a thank-you, an apology and a symbol of romance, flowers are appropriate for just about every occasion. We've been giving each other flowers for thousands of years as a way to express our emotions.

The ancient Romans, Chinese and Greeks all wrote about flowers in their stories and myths. In the Victorian age, people used flowers as a way of showing their feelings because at that time, society discouraged open verbal expressions of emotion. Specific colors meant certain things: Red signified passion, white meant chastity or virtue and yellow showed friendship. Even the size of the flowers or their arrangement could convey a message.

You must take care, however, when presenting someone from another country or culture with flowers. What means something lovely to you may be offensive or bad luck to someone else. In Russia, the Ukraine and former members of the Soviet Union, if you plan to give a woman flowers for a joyful occasion, make sure you give her an odd number of flowers (unlike the even dozen typically given in North America). Even numbers of flowers are reserved for grieving and funerals. This tradition also holds true with some Europeans, but also steer clear of the number 13, as it's considered an unlucky number. Also, avoid giving a woman yellow flowers. Yellow is said to signify the end of a relationship. Unless that's your intent, of course!

Now that you know why it's bad luck to give someone an even number of flowers, let's check out some other flower-related traditions and superstitions around the world.

Typically, giving someone flowers is a thoughtful and appreciated gesture in all cultures. As long as you're aware of cultural traditions, why not brighten someone's day? Just maybe avoid an even number of them.