Why do people throw salt over their shoulders? 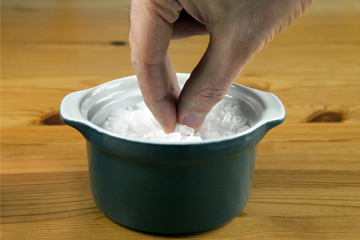 Salt used to be such a hot commodity that spilling it was akin to losing money.
per_carl/Thinkstock

Lots of chefs do it on television. Your grandma does it while she's cooking. You see the guy at the pizzeria do it. One time you even saw a woman at a restaurant do it. You might even do it yourself. So many people do it without understanding why, but throwing salt over your shoulder is an old tradition.

According to superstition, spilling salt is bad luck and throwing a pinch over your shoulder reverses that bad luck. Typically, it's thrown over the left shoulder. We don't know exactly when this tradition began, but there are a few explanations about why spilled salt is bad luck.

Take a close look at Leonardo da Vinci's painting The Last Supper, and you'll see that Judas Iscariot has knocked over the salt with his elbow. Because Judas betrayed Jesus Christ in the Bible, people began associating salt with lies and disloyalty. Throwing salt over the left shoulder blinds the devil, who was waiting there to force you into acts of bad behavior as well.

Why toss it over the left side? Some Christian beliefs hold that the devil hangs around behind your left shoulder, waiting to take advantage of you. If you spill salt, the devil sees it as an invitation to step in and do evil. Throwing it over your shoulder into his face blinds him and renders him helpless.

One theory has more to do with etiquette than warding off bad luck. In ancient times, salt was expensive -- so precious that, in some civilizations, it was even used as currency [source: Pettit]. Spilling salt was tantamount to throwing away money, and only the devil would cause someone to act with such foolishness. Tossing a pinch over your shoulder would blind the devil and make him think twice about trying to trick you again.

If you spilled the salt, you must be the one to throw it over your shoulder, or you won't thwart the bad luck. If you're the superstitious type, or just like to play it safe, it probably wouldn't hurt to toss a little pinch of that sodium chloride over your left shoulder should you accidentally spill some. You never know what might be lurking behind you!