Is it rude to use your phone at the table? 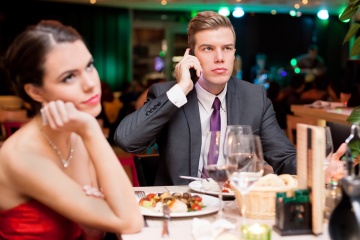 Answering your cellphone at the dinner table is often seen as rude or inconsiderate, but it turns out many people do it nowadays. Is it slowly becoming more acceptable?
Igor Mojzes/Thinkstock

The good news is that -- unlike a lot of the digital frontier -- there is quite a bit of discussion about the etiquette of phone use at the table. The bad news? Just because lots of people talk about phone-table etiquette doesn't mean anybody agrees on it. Like etiquette, in general, we're dealing with a set of social rules that only applies to whatever part of society that agrees with them. At best, that leaves a lot of room for ignorance and -- at worst-- a straight-up contradiction.

But let's not punch in the numbers on our cell to ring in the death of manners yet. Instead, let's take a look at some of the opinions floating around about phones at the table. We'll see how some of this advice makes a lot of sense -- and some of it is destined to be ignored for generations to come, so why bother. By the end, we'll get some idea of when phone use at meals is going to get you a reprimand or when you can totally get away with it.

The first point is important: Any of us over the age of 10 have clearly noticed that using a phone at the table has morphed from an offensive action to a ubiquitous one over the past decade. Of course, that's probably due in large part to the fact that cellphones themselves have caught on faster than any other consumer technology [source: Rainie]. In 2004, 65 percent of Americans owned a cell phone. By 2013, a whopping 91 percent of American adults had one [source: Rainie]. It shouldn't be a big surprise that we didn't all agree on a way to most politely use the technology or that the sudden adoption would mean a free-for-all of use.

So let's first acknowledge that a lot of us are using our phones constantly, from checking email to texts to (the horror) actually receiving a phone call. And the phones are designed to be used every moment of every day for just this purpose. Most people agree that doesn't mean we must use them every moment, and that's where we get into table manners -- a place where etiquette has long been established.

When it comes to table manners, the experts agree: Meals are a time to eat and converse and not a time to read the paper, stare at the television or check your phone 17 times [source: Post Senning]. If you're expecting to receive an important call or message, it does seem fair to warn your companions, but it doesn't mean that it gives you free reign to stare at your phone. The most sensible response would be to leave the table for a call you judge more important than the meal [source: Miss Manners].