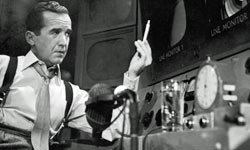 You can eat my shorts or talk to my hand. But whatever you do, thank you for your support. The balcony is closed, so don't squeeze the Charmin. Still, I would like to buy a vowel, and that's all folks. Good night, and good luck.

Since the average American watches approximately 153 hours of TV every month, it shouldn't come as a surprise that some of what is said on TV has crept into our language [source: Nielson]. Admit it: How many times did you say "yada, yada, yada" when "Seinfeld" was all the rage?

It's no secret that TV has had a great influence on popular culture. TV often sets trends in fashion, music and in language. Sometimes TV buzzwords or catchphrases even make it into the dictionary. For example, "d'oh," Homer Simpson's smack-in-the-head lament, is now part of the Oxford English Dictionary. According to the editors, doh (spelled without the apostrophe) means "expressing frustration at the realization that things have turned out badly or not as planned, or that one has just said or done something foolish" [source: Libaw].

The language of TV has even wormed its way into our political discourse. When Walter Mondale battled Gary Hart for the Democratic presidential nomination in 1984, he used a slogan from a Wendy's commercial to describe Hart's policies as lacking depth. "Where's the beef?" Mondale asked [source: Time].

How language changes and moves from place to place is very complex. Most language migrates from cities, which are cultural focal points, to rural areas. In some cases, though, it is the reverse. Most people think that television and other forms of media are homogenizing the English language. However, while TV shows have contributed some words and expressions to the vocabulary, most people want to speak just like their friends [source: Wolfram].

Go to the next page and tune in on some of the ways television has influenced the way we speak.