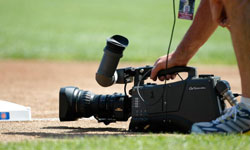 In the stands, a baseball game is about hot dogs, foam hands and soft ice cream that you eat out of a plastic baseball cap. Oh, and there are some guys trying to hit a twine-wrapped cork with a stick way down there on a field. When they do, you cheer or boo.

But on television, it's another story -- you watch from the batter's eyes as the pitcher shakes off one sign, then another, then nods. He spits once, delivers, and you can see the curveball's arc. The batter swings and misses. And then it's time for commercials.

Television hasn't done much to baseball, other than making it more up close and personal -- a story instead of a backdrop for a sunny summer's eve. Other sports have followed similar televised trajectories. Football is full of color, cheerleaders and end-zone dances -- all of which you might miss without television.

But what about those pesky TV timeouts? And instant replay? And changing golf's match play to stroke play?

For better or worse, all of these are due to television. So how else has TV changed the sports we love? And how has TV helped to create these very sports? Keep reading to find out.

In the 2010 Winter Olympic Games, Canadian figure skater Joannie Rochette laid down an almost flawless short program, two days after her mother died suddenly from a heart attack. She would go on to win the bronze. In 1996, Kerri Strug ensured an American gold in gymnastics over the Russian team by scoring 9.712 on her second vault -- on an ankle that then required medical treatment for third-degree lateral sprain and tendon damage. And who can forget Tonya versus Nancy in a bitter figure skating rivalry? Or Brett Favre's four touchdowns, 399 yards and passer rating of 154.9 in a Monday night football game the day after he lost his dad?

These fascinating sports stories only work if we know the players, and we can know the players better through the magical television powers of close-ups, commentary and commercials. We need Morgan Freeman's famous tear-jerking mini-profiles of Olympic athletes for VISA in 2008. We need to know that after Strug's first vault, she asked her coach, Bela Karolyi, "Do we need this?" To which he replied, "Kerri, we need you to go one more time. We need you one more time for the gold" [source: Weinberg].

TV allows us inside the lives, families and even the minds of athletes, making sports as much about personalities as it is about scores. 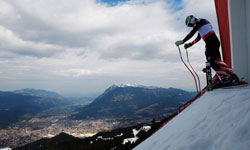 Let's go back to the Olympics again for a second. Before big TV contracts, we saw underfunded athletes toiling away on neighborhood tracks and rinks for no other reason than the love of the sport and the chance to compete at its highest level. After big TV contracts, skaters, gymnasts, skiers, sprinters and even beach volleyball players became household names, replete with the accompanying endorsement contracts.

The same is true of college football and (for a couple of weeks in March) college basketball. It's hard to consider such high-profile college athletes amateurs when they're being hyped on TV every week.

8: Death of the Minor Leagues

Before televised sports, if you wanted to catch a game, you had to go in person. Now, given the choice, many fans opt to stay home, munch a TV dinner and watch the top teams from around the world.

This same power of viewers picking from a wider palette of games means that viewers concentrate on the top college teams. Would you rather sit in the bleachers to watch your local junior college, or would you rather catch Ohio State versus Nebraska? And college teams aren't just competing for viewers -- they're also going head-to-head for recruits. The conferences that get bowl games also get the best talent. If you were a top high school player, would you go to your local college, or would you sign on the dotted line of the Big 10, Pac 10, SEC or Big 12, expecting your skills to be seen by millions of at-home bowl fans around the country? 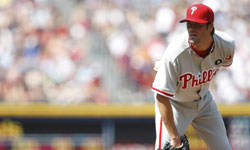 We want it all, right when we want it, and with time delay and rebroadcasting of sports from around the world, we can have it. Do you think Indian cricket and soccer are too horribly boring to even consider watching? You should see just the highlights -- they rock!

On the flip side of time delay is the desire, if at all possible, to see sports live. This means that baseball games last into the wee hours of October mornings on the East Coast in order to catch prime-time viewers in the West. It also means that the NBA playoffs include 16 teams, which play well into June. If there's an audience to be had, TV sports will have it. 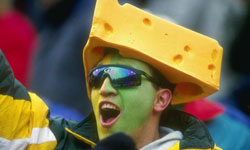 Not only do sports look different due to big TV contracts and the all-powerful influence of the close-up, but TV has rent asunder the very fabric of the universe on which sports sit. TV has changed the rules.

For example, golf went from match play to stroke play to help ensure that the big name golfers were in the final stages, when most people watch TV. And in the 1970s, tennis introduced the tiebreak to replace long, boring deuce games. The NFL first cut down halftime to help games squeeze into a 2.5-hour time slot. Then they went the opposite way -- TV timeouts pushed the average length of an NFL game from 2 hours and 57 minutes in 1978 to 3 hours and 11 minutes in 1990 [sources: Harris and Zoglin et al].

In his game-changing book, "Sport in Society," Jay Coakley points out five objectives of rule changes in commercialized sports:

It's easy to see television's impact on this list! 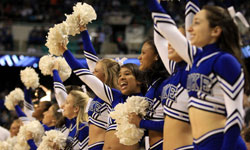 Cheerleaders, such as this squad from Duke University at a 2011 basketball game, help add to the excitement of sports, even for those watching the game on TV.
Streeter Lecka/Getty Images

These cheerleaders proved sufficient to whip up excitement in the stands. But have you ever seen cheerleaders from a seat high in the bleachers? It's not nearly as immediate an experience as seeing the same cheerleaders shot close-up from either a high or a low angle.

The modern conception of cheerleaders is a product of television.

The first instant replay was of the winning touchdown in a 1963 college football game between Army and Navy. But that's just about how people view the game -- more controversial and perhaps with more impact on games themselves is the use of replay by officials. Replay at its most extreme is seen in rugby, where a TV ref helps the on-field ref make decisions. Or remember the red card given to Zinedine Zidane for head-butting an opponent in the chest during the 2006 World Cup? The ref missed it completely -- until he saw it replayed on the big screen.

Sure, we can see a quarterback's arm in super-slow motion from almost every conceivable angle to discover (almost) definitively whether the arm had started its forward progress when the ball popped out. But should we? Certainly in this era of instant replay, fewer bad calls affect the outcomes of games. But the antiquated theory was that bad calls were part of the sport -- the way the ball bounces. 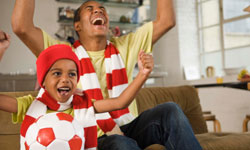