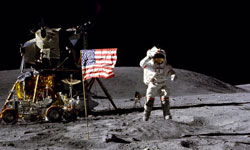 The world was watching on TV in 1969 when the Apollo 11 moon landing became one of the biggest moments in history.
Apic/Hulton Archive/Getty Images

Television. Love it or hate it, you have to admit that TV is one of the most powerful forms of mass media in the Western world. Not everyone sees billboards, and readers can turn the page to avoid newspaper or magazine ads. And while the Internet may be a pervasive force in modern culture, it's so vast and diverse that online messages can get lost in the ocean of content.

But TV, even seven decades after its first appearance in the consumer marketplace, is still a phenomenally powerful communication tool. Millions upon millions of viewers tune in every week to their favorite shows -- and absorb the associated ads that break into the programming every 15 minutes. Hundreds of millions of people from around the world tune in at the same moment to capture live broadcasts of world-changing events. And the news that broadcasters transmit every night influences the next day's actions for countless people around the globe.

The debate over the positive and negative effects of television programming continues to swing back and forth, but it would be very hard to deny that TV has produced world-changing events. Read on, and learn more about some of the most significant moments in TV history, when the images on our glowing screens changed our views of the world.