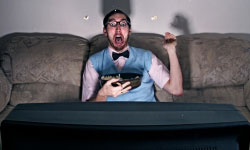 Have you ever gotten hooked on a television show, only to see it struggle? See more pictures of TV shows.
©iStockphoto.com/RyanJLane

Fans take their favorite TV shows very seriously. They form online communities, recreate favorite scenes with live action role-playing, and fly long distances to meet each other at conferences. They live and breathe their favorite programs, often going to great lengths to convince studio big wigs to grant low-rated shows a reprieve. When CBS canceled the show "Jericho," for instance, fans rallied by sending nearly 40,000 pounds of nuts to executives in protest. (The nuts were a nod to lead character Jake Green, who replied "nuts" to a demand that he surrender in what could have been the show's final episode.) The fan campaign worked, and CBS brought the show back for a second season.

Most shows in danger of getting canceled aren't as lucky as "Jericho." Some fizzle out and are quickly forgotten. Others disburse into the collective unconscious, only to be reborn or revamped at some point in the future. Others, like the cult TV hits discussed in this article, live on long after they leave the airways. This list highlights a handful of beloved cult TV hits from each of the major television genres.

First up, we discuss two shows from the action/adventure category. "Jericho," the shows fans saved by saying "nuts" to its cancellation, is first on our list.