Did cooking shows create a generation of foodies? 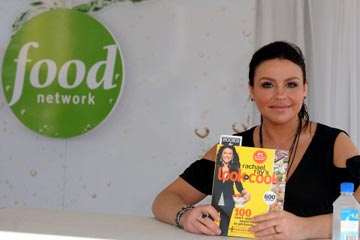 Since her debut on Food Network in the early 2000s, Rachael Ray has starred in five different cooking shows and authored an astonishing 21 cookbooks. Not too shabby for someone who never had any professional culinary school training!
Gustavo Caballero/Getty Images

Not too long ago, foodies were rare birds. Maybe you knew one -- a friend who had a weekly date with "The Galloping Gourmet" on PBS, perhaps, or a coworker who once traveled an outrageous distance to procure a rare Russian caviar. Food writers Paul Levy and Ann Barr brought the term into the public consciousness in the mid-'80s with "The Official Foodie Handbook." Back then, "foodie" had definite snobby undertones -- most people like food, of course, but foodies weren't people who merely enjoyed eating out once in awhile at the local diner. Foodies were gourmet home chefs who cooked with hard-to-find ingredients. They spent astonishing amounts on seven-course meals at obscure restaurants. They read "Bon Appétit" and "Cook's Illustrated" magazines. They were connoisseurs.

Then came the Food Network in 1993, which turned the somewhat-sparse cooking show scene into the equivalent of a 24/7, all-you-can-eat buffet. It started off slowly, but eventually a lot of viewers -- and competitors -- jumped on the bandwagon. Food Network was the 20th highest-rated cable network in 2005 and zoomed up to ninth place in the first quarter of 2010, reaching more than 100 million households. As of April 2011, there were 103 shows listed on the network's Web site. And Food Network certainly isn't the only player anymore; it spawned a spinoff, the Cooking Channel, in 2010, and TLC, Bravo, the Travel Channel and IFC (among many others) have all added food programming in the past few years [sources: Salkin, Pollan].

Thanks to cooking shows (and the Internet) there are millions of people who now identify themselves as foodies, but perhaps "food TV enthusiasts" would be a better description. A lot of the interest isn't so much in cooking as it is in the experience of eating -- and also watching reality show competitors complete tasks that are pretty much impossible to replicate at home. Food lovers can still learn how to cook a classic beef bourguignon, for example, but they can also watch Adam Richman trying to finish the world's biggest hamburger on "Man v. Food" or Anthony Bourdain of "No Reservations" chowing down on rattlesnake and alligator. To be fair, cooking shows have certainly created more interest in organic and locally produced ingredients, fine dining and homemade dishes, but today's audience is a far cry from the one Levy and Barr were writing for in 1984.

In a word, yes. The explosion of cooking shows has created a new generation of foodies -- and also redefined the word. So what does "foodie" mean today?

Foodies Then and Now

Before the Internet and food TV, you had to be pretty dedicated to be a foodie. It didn't hurt to have deep pockets, either -- how else would you be able to sample so many vintages of wine and wheels of aged cheeses? Now, though, it's easy (and a lot cheaper) to be a next-generation foodie -- just turn on your TV anytime, day or night, and you can be transported to a restaurant in Zimbabwe, a bar in Barcelona or a test kitchen in Los Angeles. Of course, you still need to shell out if you want exceptional ingredients or the fine-dining experience at Per Se, but you only really need cable TV if you want foodie knowledge.

Strangely though, for all their popularity, TV cooking shows don't do what you'd think they would: inspire people to cook. In fact, just the opposite has happened; Americans continue to eat out more and cook less. We make best-sellers out of celebrity-chef cookbooks, but it doesn't seem like many of us are actually taking a stab at the recipes [source: Pollan].

One of the most common criticisms of so-called "dump and stir" programming is that it creates a false reality of what it's like to be a chef, and even the wrong idea of how to go about cooking a meal in your own kitchen. On a TV program, every dish always turns out perfectly, and with all the camera angles and editing, it's hard to get an idea of how long the cooking and baking really takes. If you're accustomed to watching Food Network stars Giada De Laurentiis and Ina Garten whip up beautiful meals without batting an eye, trying to duplicate that feat at home can be pretty intimidating. According to New York Times Food Writer Michael Pollan, many Americans spend a lot more time watching cooking programs than actually cooking [source: Pollan].

It might be tempting to say this new generation weaned on cooking shows and celebrity chefs is a watered-down version of the old foodie -- at the least, there's less emphasis on actual cooking. But thankfully, the snob factor is disappearing now that everyone with cable and Internet access can learn about the latest trends and newest restaurants. Food TV enthusiasts are well rounded and incredibly knowledgeable, thanks to the nonstop stream of food information at their fingertips. And that has to be, as Martha Stewart is fond of saying, "a good thing."

Click through to the next page for more fun foodie facts.

Julia Child's "The French Chef," which aired on PBS from 1963 to 1966 again from 1970 to 1973, was the grandmother of all cooking shows. One interesting difference between Julia Child and today's TV chefs: Child cooked in real time. The show was taped live -- no cuts, no editing. "The grand thing about cooking is you can eat your mistakes," she famously said in one episode, after nearly dropping a potato pancake on the floor [sources: Mellows, Pollan].

Why Do We Have Middle Names?
Hey Dad! The Famous Fathers Quiz
Why Do We Love Guinness World Records So Much?