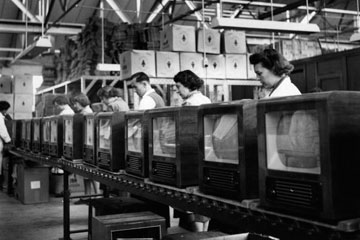 For many of us, it's probably hard to imagine a time when there wasn't a television in the living room, telling us stories and keeping us connected to the world. In fact, television probably consumes a bit more of our time than we'd like to think! Of course, these days, we hear so much about streaming media and the technological advances bearing down on us that television can seem almost quaint, even with all the power -- and cash -- it still commands.

But only 50 years ago, television was in its infancy. The deprivation of the Great Depression, followed by the global iniquities and tragedies of World War II, led to a period of prosperity and consumerism that had effects on American society that we're still learning about. In the wake of the war, cultural changes swept the country, including changes in the way we make and watch television. And in its turn, television changed -- and continues to change -- the way we interact with each other.

The first television sets, stations and networks were already being built before the war. During the war, most -- but not all -- television production ceased. But afterward, television and the new, post-war vision of America contributed to the creation of the world in which we live today.

On the next few pages, we'll look more deeply into this period in the history of American television and its place in post-war society.

All through the Depression and then the war, Americans were deprived not just of their luxuries, but often of the basic necessities they'd come to expect. While the U.S. has always been a relatively prosperous nation, people had a lot of resentment about their inability to provide for their families in the years before and during the war.

But the greatest generation is known for being thrifty! Public spending for the war jump-started the economy, and Cold War defense spending helped keep it going. But so did the average American. In this new boom, Americans could afford middle-class necessities, like automobiles and houses, which they'd been wishing for for a long time.

Americans responded to this prosperity by pumping as much money into the economy as they could. During the 15 years after World War II, the U.S. experienced great economic growth and cemented its reputation as the world's richest country. The gross national product more than doubled from 1940 to 1960, and most Americans began to think of themselves as middle class. Car production quadrupled in the decade between 1946 and 1955 [source: U.S. Department of State].

The rapid integration of television into American society coincided with the explosive rise of this post-war consumer culture for several reasons. A household appliance that was finally affordable, TV provided hours of entertainment for what suddenly seemed like a reasonable price. And because the system ran -- and largely still runs -- on advertising, companies could use the sales platform to sell their products.

It was the perfect situation for this new medium to become central to American routine: There was already a structure in place, thanks to radio, for television to take its place in homes. The advertising model used in radio could have an even greater effect on TV by actually showing the products for sale. And that was just the beginning: Once advertisers realized the power of a 30-second ad, programs went from being sponsored by single corporations to advertising several products at once, which meant a dramatic increase in the number of ads on TV. 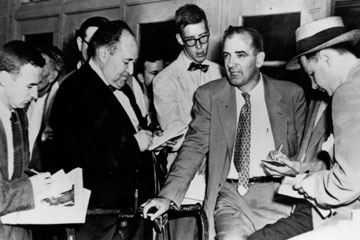 In order to stay on the good sides of both Washington and affluent Americans, advertisers had no reason to stray from their white, middle-class focus. At the same time, McCarthyism and the Cold War were activating panic across the country -- think about the bomb shelter trend, or schoolhouse "duck-and-cover" drills -- and most Americans just wanted to get back to the way they now remembered things being before the war.

Television both reflected and fed this rush to conformity, giving the grateful masses a shared experience of accepted social patterns. Many classic and familiar television forms -- like the sitcom and the soap opera -- arose in this environment, and they carry some earmarks of this desire for conformity and consumerism. Our desires created the programming -- to keep the advertisers happy -- and the programming, in turn, affected our desires.

But American unrest was provoked and documented by television, too. The civil rights movement wouldn't have come about in the way that it did without first the suppressive whitewashing of television and, later, newscasts detailing the means and reasons protesters were making their voices heard. Television created another feedback loop, in which the fight for civil rights created the news, and the news created the fight in turn.

In the end, the story is the same now as it has been since the birth of television in the years after the war: Television both makes the news and reports it. We learn about our society based on the stories, fictional and otherwise, that it brings us. The ways that we react to that information, as a society, dictate what television does next, and so on.

But the whole cycle -- which continues even now on cable channels, the Internet and an ever-growing variety of gadgets -- got its start in post-war America. Perhaps, having grown up with television, current generations will be more savvy about the images it's selling us.