Why do we get presents in our stockings? 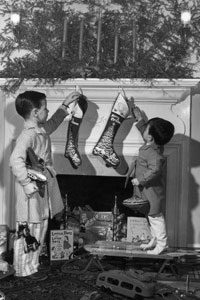 Christmas stockings may have come from a Dutch custom of placing wooden shoes out the night before Christmas. See more Christmas pictures.
Lambert/Archive/Getty Images

For many people who celebrate Christmas, the holiday is full of small traditions. Decorating the tree and hanging lights, wreaths and mistletoe are just a few of the seasonal visual clues that mark colder weather and a possible visit from Santa Claus.

Actually, the chances of Santa landing on your roof in his sleigh are pretty high -- the big gamble, though, is whether or not he stuffs your Christmas stockings with presents or a shiny lump of coal.

Hanging stockings over the chimney is an integral part of Christmas, and these oversized stockings are reserved for smaller gifts like candy and action figures. But why do we hang stockings anyway, and how did the tradition start?

Although most countries have their own variations on Santa, the oldest reference to St. Nicholas goes as far back as the third century. The ancient town of Myra, located in what is now modern Turkey, is home to a shrine dedicated to Bishop Nicholas. Over several centuries, tales spread detailing the benevolence and generosity of Bishop Nicholas, and this is where the idea of St. Nick as gift-giver began [source: BSU].

One of the stories, it turns out, involves Nicholas passing by the homes of maidens too poor to afford a dowry -- money that a bride gives to her groom for their wedding. The bishop would throw gold coins down the chimneys of these maidens, where they would fall into stockings, which were hung over the fire to dry.

Dutch children take part in another tradition -- one that may have directly influenced the North American practice of hanging stockings. The children leave wooden shoes out by the fireplace, which are filled with hay for Sinterklaas's horse (the Dutch version of Santa Claus not only has a different name, but a different mode of transportation). Santa replaces the hay with gifts, and it's thought that Americans adapted this tradition sometime in the early 19th century [source: BSU].

So n­ow that you know why some people hang stockings for Christmas, have you ever wondered how Santa actually gets down the chimney in the first place? What if you don't have a chimney? Fortunately, we have what we think is the most logical explanation, so follow the link to find out how Santa climbs down the chimney.

For more Christmas-related articles, see the next page.

5 Unforgettable Costume Ideas for Teens
Bastille Day: The French Holiday Celebrating Peace and Revolution
Why Is Everyone Dreaming of a White Christmas?