How Does Santa Make It Around the World in One Night?

by John Fuller
Tim Allen, dressed as Santa Claus, talks to a child in a sled in a scene from the film "The Santa Clause." Walt Disney Pictures/Moviepix/Getty Images

For all of you Santa Claus doubters out there wondering how the big guy can make it across the world in one night, take a good look at "Star Trek." Although the U.S.S. Enterprise is a fictional spaceship from a fictional television show, the idea of traveling at superluminal speeds -- faster than the speed of light -- throughout space is a very real concept.

When Einstein wrote down his famous E = MC² formula, he was saying that mass is energy in a very concentrated form. If you could take matter and convert it into energy, it could create an incredible source of power. Think about it -- the C2 in that equation is the speed of light (300,000 miles per second) times the speed of light. Even if you had a tiny bit of mass -- the letter "M" in the equation -- the letter "E" on the other side of that equation can be really big. So how do you make that "E" big enough to travel around the world in one night -- on a sleigh with nine or more reindeer, for that matter?

Althou­gh no one may ever know for sure just how Santa operates, we at HowStuffWorks have what we think are the most logical explanations for how the big guy accomplishes all that he does: science and technology. And we think that Santa could have mastered the power of antimatter, the same concept NASA is hoping to use to build its own version of the U.S.S. Enterprise.

Santa and his elves would have to outfit his sleigh with a Stardust Antimatter Propulsion Engine. This device would allow Santa to deliver toys around the world in one night and be back to the North Pole in time for a Christmas Day feast. So what is antimatter, and what makes it so important in Santa's sleigh? In the next section, we'll look at how Santa could be using antimatter in his sleigh.­ ­

Antimatter is exactly what it sounds like -- the opposite of matter. Antimatter particles are like mirror images of normal particles, with the same mass but opposite charges. When matter and antimatter collide, they annihilate each other, creating a complete conversion of matter into energy. You can read How Antimatter Spacecraft Will Work for more information.

NASA, for instance hopes to build one that would get us to Mars in a matter of weeks [source: NASA]. But Santa's way ahead of the game. One reason it's hard for us to build a matter-antimatter engine is because of the lack of antimatter in the universe -- scientists believe that during the Big Bang, there was more matter than antimatter, and most of the antimatter was annihilated.

Fortunately, we can make antimatter ourselves with big atom smashers like CERN. If we could find a way to safely contain antimatter, we'd be on our way to Mars in about a month. We think that Santa could have a large stock of antimatter in the North Pole -- could that be why Canada, Russia and the U.S. are all scrambling to claim the Arctic?

Another big problem with antimatter propulsion drives is the intense amount of gamma radiation released from the matter-antimatter collision. Since radiation is very harmful, it could put Santa at risk. So we surmise that he must have a closet full of special lead-free red suit to block any surrounding radiation.

Read the next page for even more possible evidence of Santa and his sleigh's existence. 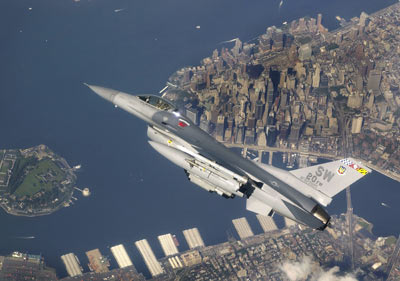 Now that we've explored the science behind Santa's sleigh, let's take a look at who else is tracking his flight path.

The North American Aerospace Defense Command, or NORAD, is a military organization run by both the United States and Canada, and its job is to monitor all possible aerial attacks coming into North America. With a massive amount of radar systems installed across Canada, NORAD can track quite a lot of airspace movement.

NORAD keeps an eye on more than just potential attacks, however, as they have tracked Santa's movements for more than 50 years. The tradition began in 1955 when NORAD's predecessor, the Continental Air Defense Command (CONAD), received several calls from children hoping to speak with Santa Claus -- a Sears department store had mistakenly listed Santa's number as CONAD's operations hotline. The Director of Operations at the time, Colonel Harry Shoup, located Santa's sleigh on radar, and the tradition was passed onto NORAD when it formed in 1958 [source: NORAD]. Today, you can still call or send e-mails, and hundreds of volunteers spend their Christmas Eve relaying information to thousands of children curious about Santa's whereabouts.

So how do they do it? They simply take the same technology used for detecting missiles and apply it to Santa's sleigh. NORAD uses heat-seeking geosynchronous satellites to track missiles. Since missiles give off lots of heat when they're fired off, it's fairly easy to track them [source: NORAD]. Since Santa's Stardust Antimatter Propulsion Rocket would get pretty hot when it travels around the world, NORAD could figure out his general location throughout the night. Rudolph's nose would also give off some extra heat, too, making it all the easier to follow the sleigh's progress throughout Christmas Eve.

If evidence from one major organization isn't enough, in 2006, the Federal Aviation Administration (FAA) cleared Santa for flight [source: ComPilots Aviation Portal]. Responsible for ensuring the safety of millions of holiday travelers every year with a complex network of air traffic control systems, the FAA recognized jolly old St. Nick's flight path and confirmed his coordinates in one clean sweep.

For more on high-speed travel and other Christmas-related articles, see the next page.

How Festivus Works
10 Fun Halloween Facts for Families
Why Do We Celebrate Labor Day?