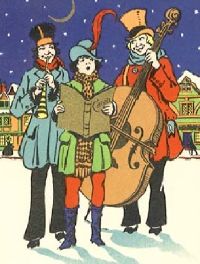 From 'Deck the Halls' to 'Jingle Bells,' Christmas songs are an essential part of the holiday season.
©2006 Publications International, Ltd.

Close your eyes and listen for the bells. Imagine the snow falling softly in the cozy glow of evening. Expect the smell of evergreen. You've arrived at a place somewhere between your heart and soul: the world of Christmas songs.

If you've yet to discover the stories behind some of the Christmas standards you've been hearing -- and playing and singing -- your entire life, you're in for a treat. Some of the carols you will read about in this article are steeped in the mystery of medieval chants.

Others began as church sermons, prayers, or meditations. From famed classical composers to pop lyricists, from Broadway theater producers to simple pastors, the lyricists and composers included here are filled with the results of faith and talent -- rich musical gifts that have transcended centuries.

To help guide you though your own Christmas season, we've selected a holiday menu of favorites -- songs you never grow weary of hearing. Learn a bit about how these songs came to reach our ears as you peruse the included histories. We've also included lyrics to each of these Christmas songs and -- for you musicians out there -- sheet music that can be downloaded.

All told, we cover 35 Christmas songs in this article, including: