Crime Does Pay (for the Phone Company): Prison Telephone Services 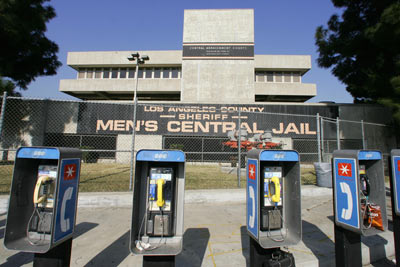 A long distance collect call from within prison walls can cost dramatically more than one made at these pay phones outside the prison.
Robyn Beck/AFP/Getty Images

One of the most important advantages of the telephone is that it allows separated families to stay emotionally connected despite geographic and physical barriers. This can be especially important when it comes to prisoners. They can continue to talk to their kids, spouses or parents.

However, jails refuse to incur the costs of inmates' long distance phone calls. Consequently, jails require that prisoners always call collect, meaning that the receiving party accepts the charges of the call. Therefore, in order for prisoners to keep in touch with their spouses, parents and/or children, the family needs to foot the phone bill. When the phone bill arrives, many of these families notice that it is oddly high. That's because phone companies charge much more for a collect call from prison than they would a collect call from any other place.

Looking to cash in on the fact that prisoners are required to call collect, prisons enter into contracts with phone companies that charge exorbitant rates for those calls. In return for this contract, the phone company agrees to share the extra profits with the prison. For example, one protest group claimed the a 15-minute collect call made from an inmate at San Quentin Prison to Oakland would be $5, whereas an equivalent collect call made from outside prison would be about $2.55.

This practice is common in prisons all over the U.S., and New York state prisons have collected about $20 million a year by accepting 57 percent of the phone company's revenue from prisoners' calls [source: Kalish]. Although many believe these rates are unfair, prisons often defend the practice by pointing out that the money covers prison security costs -- for example, it would cover telephone call monitoring expenses. Courts have tried to hammer out this issue, but in many cases, they've decided that the practice doesn't violate equal protection rights, and the recipients who agree to accept the charges of the collect call are limited to the rights of the prisoner who makes the call [source: AELE]. Federal courts have also maintained that prisoners in federal prisons don't have a right to a specific phone rate.

In order to help out these families, a call forwarding service can act as the middle-man and cut the costs of these phone calls. This kind of service is set up close to a prison so that the prisoner calls its number locally. Then the service, which gets competitively-low long distance rates from the phone company, connects the prisoner to a long distance number. One of these services, "Outside Connections" in New York, claims it saves prisoners' families about 12 cents a minute [source: Kalish]. However, prisons claim these services are a security risk, and prisons have been known to punish inmates for using them.

Not all these complaints about unfair phone rates have fallen on deaf ears. South Dakota prisons have instituted a system where prisoners can set up prepaid debit accounts for prison telephone calls [source: SD DOC]. Not only does this let the inmate pay for his or her own phone calls, but the debit account system is a cheaper alternative to collect calls, according to the South Dakota Department of Corrections.

Though telecommunications can lead to security breaches and a variety of abuses, prisoners' phone calls can help them stay emotionally connected to family and friends. This connection, many say, actually contributes to a prisoner's rehabilitation [source: Fernandez].

For more information on prison and telecommunications technology, read the links below.