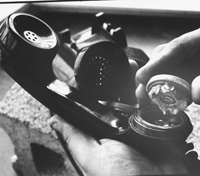 If the First Amendment can't give prisoners unlimited phone access, surely the Fourth Amendment's protection from "unreasonable searches and seizures" can protect the privacy of the calls they are permitted to make. Not really, according to the courts. Except for an inmate's discussion with a lawyer, prisons are free to tap into personal phone conversations.

The Federal Bureau of Prisons (BOP) has pointed out that court cases stipulate prisoners can't expect the same privacy in jail as they'd be entitled to otherwise [source: BOP]. And, by the courts' logic, the security concerns constitute a reasonable search. In addition, because prisons make sure to give inmates ample warning that their conversations are recorded, prisoners haven't had much luck trying to challenge this practice [source: BOP].

Even though prisons are free to listen to telephone conversations, inmates still have managed to find clever ways around this surveillance. The Texas Offender's Handbook, for instance, clarifies that inmates must not talk in code or unintelligibly, which implies prisoners have attempted to do so in the past [source: TDCJ]. The Office of the Inspector General, which oversees the BOP, has issued concerns that there isn't enough man power or training for telephone monitoring staffs to successfully tackle the amount of crimes that are committed over prison phones [source: Fine]. To help monitor calls, prisons can employ voice authentication technology, which verifies the identity of the person called [source: Tehrani]. Voice authentication involves recording someone's voice and saving it. From then on, when the prisoner wants to call that person, the technology can compare the sound of that person's voice (including, for instance, its particular frequencies) to the saved file [source: Gilhooly].

In addition, questions have come up in U.S. courts about whether an inmate is allowed to talk on the phone in a foreign language, since this could inhibit the prison's ability to monitor the conversation. Although it's a complicated issue, prisons have tried to accommodate the inmates by merely requiring that they get permission from an authorized social worker to talk on the phone in a language other than English [source: Farber]. A social worker can interview the prisoner to assess his or her risk level before granting the inmate permission for such a phone call.

Even with big brother listening in, many prisoners have successfully circumvented his surveillance simply by obtaining a cell phone. We'll discuss cell phone use in prisons next.

Surfin' the Web from the Inside

Some would like to see prisoners gain access to the Internet and argue that to deny them such a privilege infringes on their right of free speech [source: Johnson]. In England, some prisons have actually offered limited e-mail and educational Internet access to inmates [source: Ford].