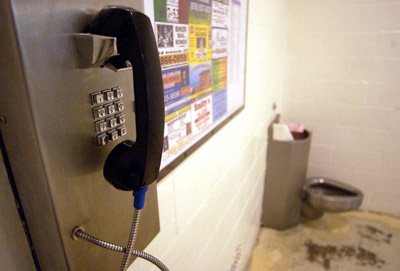 Phone use in prisons is a source of great contention and debate.
Aaron Lambert-Pool/Getty Images

In April 2008, student journalist James Karl Buck was covering a protest outside an Egyptian jail when he was arrested. Thankfully, a one-word Twitter post from his cell phone was his get-out-of-jail-free card -- he was able to alert friends to his predicament [source: Simon]. Surprisingly, the police there let him keep his phone while incarcerated. Usually inmates aren't so lucky.

­As telecommunication technologies advance, they pose as many challenges as opportunities for society. It doesn't take kids long, for instance, to get a hold of the latest iPhone or BlackBerry device and use them as "learning aids" on tests, much to the chagrin of teachers. And, if high school is enough to make kids desperate to connect in any and every way possible, you can bet real imprisonment fuels the same behavior.

As it turns out, telecommunications can be just as frustrating to regulate in prisons as in high schools, only the implications are far more dangerous. For instance, prison inmates can use the phone to conduct illegal activities, such as arranging drug trafficking on the outside and smuggling drugs into the prison, or even arranging the murder of informants and judges [source: Fine]. Cases of inmates getting a hold of contraband cell phones have plagued prisons around the world.

Prisoners are customarily allowed limited use of phones. But how connected should prisoners be? In the U.S., that question has spurred heated debate between civil liberties activists and prison authorities. Lawsuits have sprung up throughout the United States about the disproportionate costs of collect calls from prisons to families of inmates.

Do U.S. inmates have a constitutional right to use the phone? On the next page, we'll explore what the courts have said about telecommunications in prisons.