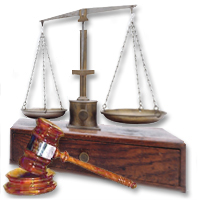 You step in a puddle of spilled cooking oil in a grocery store and break three bones in your hand. You're a concert pianist. How can you recover your lost income?

Your landlord claims you broke several things in your apartment that you didn't pay for. You know they were broken when you moved in. The forms you signed when you moved in don't specifically mention those items. How do you keep from having to replace something you aren't responsible for?

Lawsuits are filed every day. In fact, according to an article on the Citizens for a Sound Economy Web site, there are more than 15 million civil cases processed annually in state courts alone, at a cost of over $1.8 billion. Although the number of product liability cases in 2000 was less than half of the number in 1997, the courts are still clogged with civil lawsuits. Most courts are trying to encourage people to settle their disputes out of court, and some require mediation at some point in the process before you can go to trial.

­In this ­article, we'll talk about what you have to go through to take someone to court -- or, what you might be able to do to avoid court and still get some satisfaction. Keep in mind that the legal process differs from state to state so this may not always be exactly the way it works in your area.

First, let's start off by establishing that there is a difference in a civil trial and criminal trial. When you sue someone and take him to court, it is usually based on a tort. When someone breaks a criminal law, then the public prosecutor takes him to court for a criminal trial.

Torts are different from criminal laws in that a person may not have broken a law, but may have acted negligently (either intentionally or not) and as a result, someone else was injured physically, emotionally, and/or monetarily. Torts provide grounds for the lawsuit. Specific torts include trespassing, assault, battery, negligence, product liability, and intentional infliction of emotional distress. There are also three general categories that torts fall into: intentional torts (e.g., intentionally hitting someone), negligent torts (e.g., causing an accident because you didn't follow traffic rules), and strict liability torts (e.g., being responsible for damages caused by a product you manufacture and sell).

The original purpose of tort law was to compensate victims for their losses and also to help prevent future losses by punishing the defendant (the person being sued). For these reasons, there are compensatory damages, which require the defendant to pay back money the plaintiff (the one who filed the lawsuit) lost as a result of the defendant's negligence, as well as money to make up for pain and suffering. There are also punitive damages. Punitive damages are what the defendant has to pay as his punishment for being grossly negligent, malicious, reckless, or acting intentionally -- not just for making a mistake or not being careful. In an effort to get a handle on rising punitive damages, a decision was issued in July 2003 by the U.S. Supreme Court that limits the amount someone can recover in punitive damages.

If you are intent on a lawsuit, here is a quick list of the steps you'll go through before it's all said and done.

We'll walk through these steps one by one.