What does a county board of commissioners do? 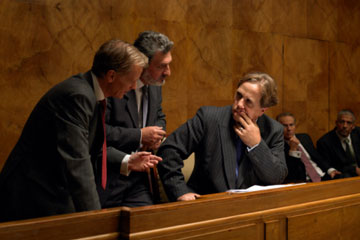 The board of commissioners is the oldest form of county government in the United States.
Michael Blann/Digital Vision/Getty Images

The board of commissioners is the oldest form of county government in America and is still very common. In colonial times, it was particularly prevalent in the South, which was less densely populated than the Northern colonies, and it spread across much of the rest of the country as the nation grew. These days, it is seen less in New England, where local government is usually administered at the town or city level. Connecticut, Rhode Island and parts of Massachusetts have no county governments at all [source: Kemp].

In a county commission form of government, a body of elected commissioners serves both the executive and the legislative duties, meaning they enact local ordinances and administer them. They approve budgets, oversee spending and hire county employees. The commission usually consists of three to five officials. In some states, they are known as supervisors. In New Jersey, they're called "chosen freeholders." And in Louisiana, they're often known as "parish police jurors" [source: Kemp].

The commissioners are responsible to the voters, but their duties are defined and controlled by the state constitution and state statutes. Their actions can be overturned by state courts. Some department heads, such as sheriff, clerk, treasurer and coroner, are elected rather than appointed by the commissioners [source: Kemp].

When many counties were still rural, the duties of the board of commissioners were limited. They kept vital records, assessed property, administered elections and maintained roads. With the spread of suburbs, many counties grew in population and began offering a far wider range of services. It is not unusual today for a board of commissioners to oversee consumer protection, economic development, planning, environmental quality and social welfare programs [source: Kemp].

Other duties that the board of commissioners may be responsible for or oversee include:

In recent decades, government reform movements have criticized the commission form of county government for not having a single chief executive in charge. Some counties have moved to one of two related forms of government in an effort to solve the issue [source: League of Women Voters]:

Today, more than 40 percent of counties have adopted one of these alternative forms [source: Kemp]. In some states, such as Tennessee, state law requires that counties be led by an elected executive [source: Kemp]. Many others, however, have continued to use the traditional county commission form of government.

Read on for more information about local government and elected officials.

Why Is Populism So Popular Again?
Gun Violence Is Down, But Awareness of Police Violence Is Up
Do Paid Protesters Really Exist?