Structure of the FBI 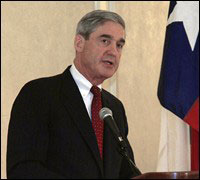 The President appoints the director of the FBI for a 10-year term. The current director is Robert S. Mueller, III. There are several deputy directors beneath him, and an executive assistant director heads each of the 11 divisions of the FBI. These divisions generally coincide with a type of crime the FBI investigates. For example, there is a counterterrorism division, a criminal investigation division and an information technology division.

The FBI is headquartered in the J. Edgar Hoover Building in Washington, D.C. Opened in 1974, the massive bunker-like building houses the director, most department heads and the world-famous FBI Crime Lab. (The FBI building tour is currently closed for renovations, but tours are scheduled to resume in Spring 2007.) FBI Field offices are located in most major cities -- there are 56 in total. A Special Agent in Charge heads each field office. An assistant director heads exceptionally large field offices in New York and Los Angeles. In addition, the FBI has about 400 resident agencies in smaller cities or other areas where an FBI presence is required.

As of March 31, 2006, the FBI employed more than 30,000 people, comprising 12,515 agents, and 17,485 support personnel, lab technicians and administrators. In the past, the FBI was considered an unfriendly place for women and minorities. In 1972, the FBI did not have a single female agent, and only a small percentage were minorities [ref]. Today, more than 13,000 FBI employees are women, with 7,691 minorities and over 1,000 people with disabilities [ref].

FBI funding is part of the Department of Justice and comes from the overall federal budget. In 2003, the FBI's total budget was $4.298 billion [ref].

Next, we'll learn about the history of the FBI.