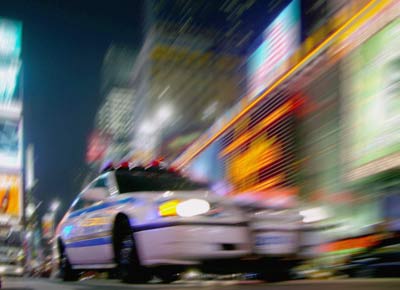 Before officers work on high-speed cornering and other aspects of pursuit driving, they have to learn how to safely operate all the equipment inside a modern police cruiser.
James Doberman/Getty Images

The car chase is a staple of action movies and reality television shows. They're usually depicted as an exciting mix of adrenaline pumping near-misses, roaring engines, squealing tires and the successful apprehension of a dangerous suspect. The police pursuit is a vital tool in putting criminals behind bars.

However, there is widespread and growing opposition to the practice of police chases. Reckless pursuits for minor infractions and tragedies in which officers, suspects or innocent bystanders are injured or killed have led many police departments and municipalities to restrict police pursuits. Only the most dangerous suspects are worth the risk, according to these new laws.

In this article, we'll see how police officers train for pursuit driving, what equipment they use and what techniques give them an edge over fleeing criminals. We'll also examine the ethical and legal concerns surrounding police chases.

Just like a service handgun, the cars driven by police officers can be dangerous if used improperly. Thorough training (both academy and in annual refresher courses) is probably the most important factor when it comes to safe and effective police pursuits. Today, police departments are increasing their focus on pursuit training. The average police academy spends less than a week on police car training, with just one or two days spent on pursuit driving [ref]. While there is still room for improvement, this is a major increase from the 1940s and 50s, when high-performance driver training was almost non-existent. Modern police training often uses an Emergency Vehicle Operations Course (EVOC).

Before officers work on high-speed cornering and other aspects of pursuit driving, they have to learn how to safely operate all the equipment inside a modern police cruiser. Potential driving distractions include activating lights and sirens, operating the radio and possibly using a data terminal. A pursuit requires 100 percent concentration on the road and traffic ahead, so these activities must be second nature to officers.

Pursuit training usually takes place on special courses designed to simulate various road and highway conditions. Some departments still do "parking lot" training, but high-performance training is impossible without a true practice course. The Colorado State Patrol Academy maintains a large test course with long straight sections for high speed, sharp turns, a simulated on-ramp and a four-way intersection [ref]. It also has two skid pads and wet concrete slabs so officers can learn to drive cars that are skidding out of control. When wet, the coefficient of friction on such a pad is about 0.15, compared to 0.75 to 0.95 on a dry highway [ref].

Some police academies require new officers to successfully navigate a race course within a certain amount of time, to make sure they can drive fast and safe. Police cars reach speeds of 120 mph or more on these courses, and a great deal of skill is required to navigate corners at such speeds.

Next, we'll learn about police cars and other equipment used in police chases.