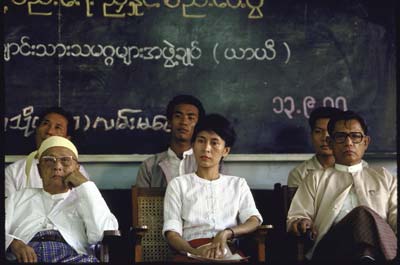 Sometimes dictators do allow elections, but they don't resemble what we think of as elections in democratic countries. Under extreme pressure from other countries, Saudi Arabian king Abdullah bin Abdul Aziz al-Saud allowed municipal elections in 2005, the first elections since the 1960s. These elections allowed citizens to choose local councils. They weren't really democratic, however, because Saudi women couldn't vote. Although not expressly forbidden to vote, most women didn't have the necessary photo identification, nor were there enough female poll workers to register them (men couldn't register women to vote). Saudi Arabia as a whole continues to be ruled by an absolute monarchy.

In February 2008, the military junta ruling Burma, called the State Peace and Development Council (SPDC), announced plans for an election in 2010. A spokesperson stated that "the time has now come to change from military rule to democratic civilian rule" [source: Washington Post]. However, most of Burma's citizens, as well as other governments, don't take the junta seriously. In 1990, Burma had a general election in which Daw Aung San Suu Kyi, leader of the National League for Democracy, won. The government refused to acknowledge Kyi's win and has kept her imprisoned for much of the time since the election.

A handout photo of Saddam Hussein after his capture, December 2003
U.S. Army via Getty Images

Dictatorships sometimes come to an end just as chaotically as they began. Adolf Hitler committed suicide after the Allies beat the German Armed Forces. Fascist Italian dictator Benito Mussolini was shot by Communist partisans and his body stoned by civilians. Manuel Noriega was captured after the United States invaded Panama and is serving a 30-year prison sentence in a Florida federal correctional facility. Saddam Hussein was deposed after coalition forces took control of Iraq and pulled from a small muddy foxhole by United States Armed Forces near his birthplace in Tikrit. He was later executed by the provisional government of Iraq.

Just as often, nature takes its course. Many dictatorships end when the dictator becomes too weak or sick to continue on, or dies suddenly. Vladimir Lenin suffered a series of strokes and took lesser roles in government before his death. Josef Stalin also had a stroke and died shortly afterwards. In 2008, Fidel Castro stepped down as leader of Cuba (passing the presidency to his brother Raul) after several years of worsening health.

For the most part, dictators tend to stay in power for a very long time. Or they're deposed only to be replaced by another dictator. It takes a long time to change an entire governmental structure, and often it doesn't happen without the intervention of the United Nations, the United States or other governmental organizations. Currently, more than 70 countries in the world are ruled by dictators. Many of them are guilty of atrocities against their own people.

Non-governmental organizations, such as Human Rights Watch research, report on and publicize human rights violations. They also exert pressure on governments and international organizations to bring about reform in areas of extensive human rights abuses. Perhaps the recent removals and resignations of dictators signal a trend toward elected rulers who allow their citizens the basic freedoms that many of us take for granted today.

For more information on dictators, fascism and all things politics, try the next page.

A benevolent dictator is a dictator who exercises his absolute power for the good of his citizens, instead of the good of himself or his friends and associates. This term is subjective, just as the current interpretation of the word dictator can be subjective. Backers of Napoleon considered him to be benevolent. So do supporters of Castro and his regime. However, those who suffered under the reigns of these and others considered by some to be benevolent dictators would disagree.