What happens in a coup d'etat? 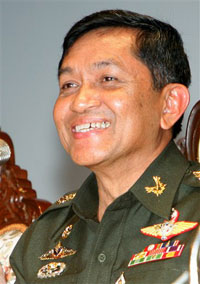 In June 2012, two sides claimed victory in Egypt's presidential run-off election. On one side was the Muslim Brotherhood, which claimed that Mohammed Morsi had 51.8 percent of the vote. On the other was Ahmed Shafiq, whose campaign declared victory with between 51.5 and 52 percent of the vote. Then, Egypt's Supreme Council of Armed Forces issued a constitutional declaration that gave the military the authority rather than either of the two candidates, leading to cries of a political coup d'etat, also known as a coup.

It's not the first time in recent memory that a military has taken over a government. For example, in December 2006, Fiji's military did just that. In September of the same year, in a surprise move that troubled international leaders but seemed to have the support of the Thai people, a military coup d'etat removed the prime minister of Thailand from power. Thaksin Shinawatra was in New York, preparing to address the United Nations General Assembly as the leader of Thailand, when he found out he was out of a job. In a televised address, Shinawatra demanded that General Sondhi Boonyaratkalin -- leader of the Thai military, orchestrator of the coup and self-appointed acting prime minister -- surrender himself. The TV address ran short. The Thai military, suddenly in charge of all media outlets, cut him off mid-speech. The coup was a success.

What happened in Thailand was a bloodless coup. No one fired a shot. The way it unfolded is fairly typical of this type of coup: The acting leader, long accused of corruption and poor leadership, was out of the country, and the top military officials took swift action under cover of darkness. They took control of the Prime Minister's residence and all government agencies. When Thailand's population woke up on Wednesday morning, soldiers were everywhere, CNN was off the air, and there was a new prime minister in office.

What makes a forced changing of the guard a coup d'etat (French for "strike to the State") as opposed to a revolution is that in a coup, there is usually no mass uprising. A small, elite group of leaders already within the government structure carries out a coup. In most cases, it is as much a shock to the people as it is to the deposed leader. When loyalties at the highest levels of the government and military are divided, a coup can be very bloody. But violence is not a defining characteristic of a coup. A coup is an illegal seizure of power -- it unseats a leader in an unconstitutional manner. When, say, a U.S. president is impeached by Congress and removed from office, that's not a coup, because impeachment procedures are set forth by the U.S. Constitution as a legitimate way of deposing a president.

A coup is usually quick, quiet and relies heavily on the element of surprise. After securing government buildings and imprisoning (if he is in the country at the time of the coup) or exiling the deposed leader, the military declares itself in control, takes over the media in order to manage the flow of information and imposes martial law. A coup can then follow one of many paths. In some cases, the leader of the coup assumes temporary power until a new national leader can be chosen. (Sometimes, that temporary power ends up being not so temporary.)

In other coups, the leader of the movement simply installs himself as the new leader of the country -- there are no new elections nor appointments planned. This often (but not always) results in a military dictatorship. But while coups are usually military in nature, they don't have to be -- Gaius Julius Caesar, for example, who ironically took control of Rome in a military coup, rendering the Roman Senate all but powerless, lost his power when several members of that Senate assassinated him in their own coup in 44 BC.

Sometimes, a coup has the popular support of the people, as was the case in the coup that brought Napolean Bonaparte to power in France in 1799. These are often the smoothest and least violent coups, when the acting leader is widely believed to be either corrupt, ineffective or both. Chile's Augusto Pinochet landed in the seat of power under circumstances like these -- Chile's Chamber of Deputies (much like a parliament) had actually asked the military to remove President Salvador Allende from power before the coup occured in 1973. Still, even "bloodless" coups are not always bloodless. When Napoleon disbanded the French parliament, his soldiers threw several members out of windows; and Pinochet's soldiers killed Allende when they removed him from power.

The coup that brought Pervez Musharraf to power in Pakistan in 1999 was truly bloodless. Musharraf was the highest ranking military official under Prime Minister Nawaz Sharif. When conflict erupted and Sharif ordered the military to remove Musharraf (who was out of the country) from his post, the military refused to obey the order. On hearing the news, Musharaff immediately boarded a plane and headed back to Pakistan, but Sharif would not let him land. The military, loyal to Musharaff, removed Sharif from power so that Musharaff's plane could land in Pakistan. Musharaff immediately took control of Pakistan, while Sharif settled into exile in Saudi Arabia.

For more information on coup d'etats and related topics, check out the following links: