The History of Dictatorship 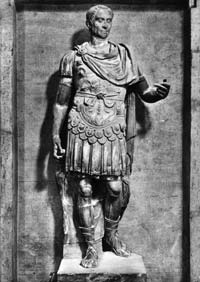 The office of dictator once had a very different meaning from how we think of it today. It was first created by the Roman Senate in 510 B.C. for emergency purposes, such as taking care of rebellions. During the time of the Republic, Rome was ruled by two consuls, and the Senate decided that in some cases it was necessary to have a single person making decisions. Sometimes, one of the consuls became dictator.

Dictators held authority over all other politicians, couldn't be held legally responsible for their actions and couldn't hold the office for longer than six months (although there were two exceptions to this rule). They could also change Roman law and the constitution, but they couldn't use any public money other than what the Senate gave them, and they couldn't leave Italy. Most dictators left office after they completed their tasks, even if their six months hadn't yet elapsed.

Titus Larcius, had been a consul. He was chosen to put down a rebellion staged by several cities that wanted to reinstate the most recent Roman king, Tarquin II. Titus Larcius was a member of the patrician class, the privileged elite. He worked to improve the lives of the plebeians, the middle- and lower-class Romans.

Dictators were appointed off and on as necessary until 202 B.C. More than 100 years later, Lucius Cornelius Sulla was appointed dictator without a term limit and without the restrictions of previous dictators. He ruled for two years in the office and executed thousands of Roman citizens, many of them political opponents. Sulla also became rich by confiscating property. He was succeeded by Julius Caesar, who was named dictator for life and proceeded to begin a civil war. Caesar was assassinated in 44 B.C., and the office of dictator was abolished due to its corruption.

Modern dictators usually come to power during states of emergency, too. Many historians consider Napoleon Bonaparte to be the first modern dictator. Napoleon was a general during the French Revolution, a period of huge social and political upheaval in the country. Beginning in 1789, France evolved from a monarchy to a republic, and then to an empire. In the midst of executions, coups and confusion, Napoleon became a consul under a new provisional government.

Because he was an undefeated military commander, Napoleon enjoyed immense popularity. He created a balan­ced budget, reformed the government and wrote the Civil Code that still forms the basis of French civil law today. Napoleon then abolished the Senate and continued to reform the constitution. He named himself consul for life, and in 1804, crowned himself emperor. He continued his military pursuits, fighting across Europe.

Napoleon controlled every facet of government and had a network of spies. He also controlled the press, ensuring that his propaganda machine continued. But his reign began to falter when his invasion of Russia was a failure. A coalition of European forces, including armies from Great Britain, Prussia, Spain and Portugal, surrounded France.

Generals in the French Army mutinied and Napoleon was forced to abdicate the throne. After a brief return to power, he was exiled for good in 1815.

So from ancient dictators to modern ones, dictators have several different commonalities. Let's look at what makes a dictator a dictator in the next section.