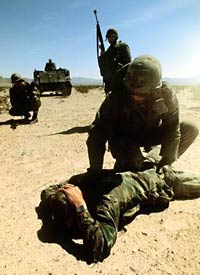 ­ In the context of any armed conflict, the topic of war crimes inevitably arises, especially in repor­ts of civilian and military casualties and the taking of prisoners of war. The idea of a "war crime" seems to be pretty redundant: Most of us are familiar with the phrase "All is fair in love and war," and in an armed conflict, in which the killing of enemy troops is considered an acceptable means to an end, it may seem that the concept of a "crime" is out of place. But there are countless treaties that declare otherwise, signed by almost every nation in the world.

­The Hague laws and Geneva Conventions are some of the most widely applied of these international agreements. These treaties address, among other issues, the participants of war, the victims of war, occupation by hostile forces and the status of cultural property. In the 2003 war in Iraq, Iraqi troops waved a white flag and then opened fire on the U.S. soldiers who approached to accept their surrender; this act is prohibited under the Hague laws. In World War II, the Nazis in Germany performed medical experiments on civilians; this act is prohibited in all of the Geneva Conventions.

In this article, you will learn about the basic "rules of war" and about specific acts that have been designated as war crimes by the Hague and Geneva Conventions.