What Makes a Dictator? 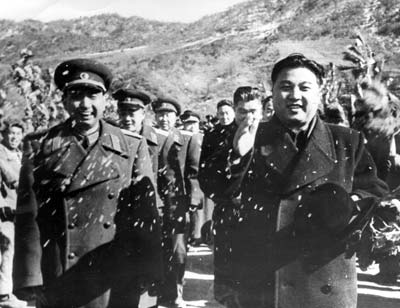 Most dictators have several characteristics in common. They usually rule autocracies, governments with a single self-appointed leader and no governing body to check his power. Often, dictators have totalitarian regimes, keeping their power through control of the mass media. Totalitarian dictators also use secret police and spy on the citizens of their state as well as restrict or completely remove their personal freedoms.

Many of these dictators foster cults of personality, a form of hero worship in which the masses are fed propaganda declaring their leader to be flawless (and in some cases, divine or divinely appointed). The North Korean dictator Kim Il-sung (father of Kim Jong-il) was essentially the sole subject of all forms of art created in the country. Schoolchildren were taught to give thanks to Kim Il-sung, the source of all of their blessings, as part of their training. Critics spoke of him as being megalomaniacal and extremely narcissistic. Saddam Hussein's Iraq was also full of statues, murals, posters and paintings bearing his image.

circa 1944: Adolf Hitler gives the fascist salute at a parade. Visible on the balcony with him are Galeazzo Ciano and Italian Benito Mussolini (far left). Just visible on the right is the hand Hermann Goering holding his Field Marshal's baton.
Keystone/Getty Images

As with ancient Roman dictators and the more recent example of Napoleon Bonaparte, it's often the case that a state of emergency or a coup d'etat results in a dictator coming to power. However, there have been dictators who got there legally. Adolf Hitler, for example, was appointed chancellor, or head of government, by President Paul von Hindenburg in 1933. After Hindenburg died, Hitler made himself Fü­hrer (a combination of president and chancellor).

In addition to being political leaders, dictators often hold the highest military office in their state as well. Many dictators were distinguished military commanders prior to gaining absolute power. Manuel Noriega of Panama was a soldier his entire life. As leader (although never officially president, he was eventually declared chief executive) of the country, he commanded its military and usually appeared in public in military uniform.

Noriega's rule was an example of a military dictatorship that had a civil government with little actual power (some military dictatorships are stratocracies in which the military directly rules the country). Military dictators often take control via a coup d'etat, but some evolve into the role. Saddam Hussein was originally the general of the Iraqi Army and vice president. He gained more power as the president at the time, Ahmed Hassan al-Bakr, became ill. Hussein officially became president in 1979.

A variation on the military dictatorship can be a junta, which is the typical military dictatorship in Latin America. This comprises a committee of military leaders, who often engage in the same types of behaviors, such as brutality and oppression, as dictatorships of one. The country of Burma has been ruled by a junta, the State Peace and Development Council, since 1988.

Once they're in power, it usually takes a lot for a dictator to step down. We'll look at elections, removals and the death of dictators next.

A well-known example of a fictional dictator is the Emperor Palpatine of "Star Wars." Palpatine started as a senator in the Galactic Republic. When his home planet Naboo came under a trade embargo, Palpatine asked Chancellor Valorum for help. When no help was forthcoming, Palpatine managed to get Valorum voted out of office and secured the role of chancellor for himself. He secretly had Naboo invaded, which created huge political unrest and ultimately granted him emergency power to make military decisions. Although Palpatine promised to return power to the Senate, he instead slowly transformed the republic into an empire and the office of chancellor into the office of emperor. His rule came to end when his apprentice, Darth Vader, betrayed him.