If You Hear Something, Say Something 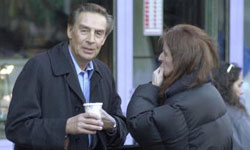 A 1996 episode of "Law & Order" called "Remand" explores the reopening of a case of a rapist who had been convicted 30 years earlier. This opens old wounds for the rape victim, who knows that several witnesses didn't come to her aid while she was being attacked.

If this last part rings any bells for you, it's because it's based on the infamous rape and murder of Kitty Genovese on the streets of New York City. In 1964, 29-year-old Genovese was coming home late at night from work. After parking in a lot not far from her apartment, she saw Winston Mosely lurking toward her with a knife. After catching up with her, Mosely stabbed her twice before hearing a voice yelling to leave her alone. Mosely then went back to move his car and got out again to find the wounded, limping Kitty in the doorway of a building, where he raped and killed her.

The nation was shocked to read the New York Times article about the story, titled "Thirty-seven Who Saw Murder Didn't Call the Police." The horrified public worried that people in cities were becoming uncaring [source: Dwyer]. Sociologists coined the "Genovese Syndrome", also known as the "Bystander Effect," and theorized that in groups, individuals expect someone else to take charge if the situation calls for it. Today, the number of people who could have seen or heard much is debated, but it's generally believed to be much fewer than 37. Still, the story is chilling.