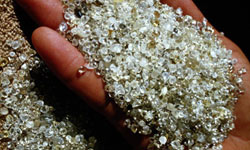 Diamond heists are surprisingly common. Some thieves try to get away with uncut stones because they're less recognizable. See more pictures of diamonds.
Peter/Stef Lamberti/Stone/Getty Images

Judging by the raging success of diamond thieves in Hollywood movies, one might think walking away with millions in diamonds is a snap. Or at the very least, a sure thing with the right amount of planning, cunning, good looks and some sort of inside connection. In the real world, of course, slipping out with the gems takes more than two hours of careful consideration.

But such heists do work occasionally and happen pretty frequently. Every couple of years or so, a team of thieves gets away with a diamond heist. A heist is no mere robbery. It's a feat of patience and engineering that yields some of the biggest payouts in history. The weird thing is, it's hard to tell if the thieves ever see the cash, since in almost every major heist, the diamonds are never found.

Are they buried under the floorboards of an abandoned basement somewhere? Were they sold to foreign princes on the down low? Or is that diamond in the jewelry store's window the very same that was stolen from the Antwerp Diamond Center in 2003 and laundered through middlemen until it was clean enough for a legitimate jeweler to give it a second glance? We'll probably never know. But this much is for sure: The thieves who go for the high-security diamonds have guts.

In this article, we'll look at 10 of the biggest diamond heists in history, all of which went down in the last few decades. We'll see how the thieves got the goods, how much they stole and what happened in the aftermath. Each heist in this article is the stuff of legend. Are you ready for the first?