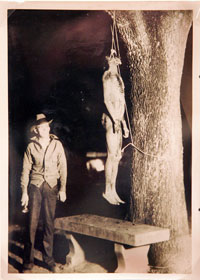 The corpse of Claude Neal, who was tortured, forced to commit autocannibalism and killed by white Southerners in Florida in 1934.
Scott Olson/Getty Images

Exocannibalism falls more in step with Western conceptions of anthropophagy than endocannibalism. The practice isn't concerned with funerary rites or the continuation of a lineage. More often, exocannibalism is based on the consumption of flesh as a means to terrify another group, steal another's life force or even simply to eat.

This last example is the case with the Mianmin, a mountain-dwelling group in Papua New Guinea. The group was well-known for practicing exocannibalism, the result of raids on neighboring villages. When a visiting anthropologist questioned the Mianmin on why they carried off dead Atbalmins, who lived nearby, the Mianmins told the scientist they considered them "good meat." To the Mianmins, the Atbalmins (who exist outside their kin group and culture), were their "game" [source: Gardner].

Exocannibalism can also maintain similar mystical and religious qualities as endocannibalism. Among the Aztecs, the practice of sacrificing captured soldiers and eating their flesh was a process of communing with the gods. It actually proved beneficial to consumer and consumed alike. Under Aztec cosmology, bravery in battle and submission to ritual sacrifice and consumption were two ways to guarantee entry to the afterlife [source: Ortiz de Montellano].

Exocannibalism appears to have outlived endocannibalism, which was eradicated by missionaries and governments in the mid-20th century. During World War II, Chinese military members reportedly ate the flesh of executed enemies [source: Chong]. In another case, an American priest reported witnessing a Chinese Nationalist general cut out and consume the heart of a captured communist in the context of this war [source: Chong]. Both Iroquois and Fiji Island cultures ritualized similar acts of cannibalistic rage (called battle rage, when found in the context of war). In both cultures, captured warriors were subjected to torture and mutilation before a crowd, before ultimately being killed and parts of their bodies eaten [source: Sanday]. Even more recently, Congolese rebels stood accused by the United Nations in 2003 of eating murdered pygmies [source: Los Angeles Times]. The rebels were also accused of a more obscure form of cannibalism: forced autocannibalism.

This rare category of cannibalism sees the collision between endo- and exocannibalism. It's the consumption of one's own flesh. It can be as innocuous as biting one's fingernails; usually it's part of a torture process. The most famous case of autocannibalism came in 1934, when a group of about 2,000 white Southerners sent invitations and announced in local newspapers around Jackson County, Florida, that they intended to sacrifice a black man. Members of the group captured Claude Neal and sacrificed him. Neal's penis and testicles were cut off and he was made to eat them. Other parts of his body were cut off (and some saved as mementos), before Neal was skinned and burned [source: Patterson].

Much of the learned cannibalism practiced throughout the world shared the common goal of transferring some vital or esoteric property from the consumed to the consumer. In some tribes, exocannibalism was practiced to obtain ingredients for potions used to gain courage or vitality. A South African tribe made a concoction called Ditlo out of the flesh of a captured enemy. To the north, in Sierra Leone, the Leopard peoples staged elaborate rituals in which the human blood and fat of members of other groups were mixed into a potion called Borfina, used for attracting wealth and power [source: Lukaschek].

But exactly where did these concepts come from? Precisely how does a culture decide that vitality or courage is obtained by ingesting the flesh of another person? What created the idea that battle should result in the cannibalism of the vanquished foe? Ultimately, there are only two explanations, and they're at odds with each other.