The Difficulty of Proving Anthropophagy 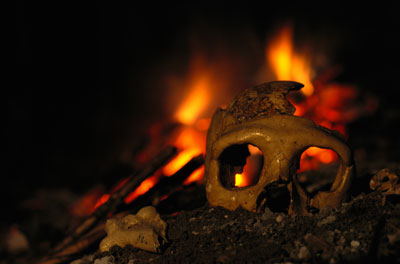 This skull of a Neanderthal woman was found in a cave in the Balkan Mountains. A 2008 theory suggests cannibalism wiped out the hominid race.
Kenneth Garrett/National Geographic/Getty Images

Most anthropologists today agree that ritual cannibalism occurred in some societies throughout human history. Yet under William Arens' view, an anthropologist must see a person cut a piece of flesh off a body and pop it into his or her mouth for definitive proof that cannibalism has taken place. This kind of evidence is few and far between.

Proving learned anthropophagy in now-defunct societies is even more difficult. In 1999, 100,000-year-old Neanderthal bones found in a cave along the Rhone River in France showed signs of human consumption. The bones appeared to have been broken open with a rock and the marrow removed. The brains of six humans seem to have suffered the same fate; the skulls are crushed open and the brains appear to have been consumed.

The discovery of this evidence of cannibalism provided the foundation for another theory advanced in 2008. Theorists have long sought to explain why the Neanderthal mysteriously vanished from the fossil record, supplanted by the rise of Homo sapiens. A rare brain disease could explain the disappearance.

In the 1950s and '60s, anthropologists studying the Fore people of Papua New Guinea documented an outbreak of kuru, a degenerative spongiform brain disease. The Fore contracted the disease by consuming the brain of their relatives as part of a funerary ritual. Kuru, which is the human version of mad cow disease, is highly contagious. If kuru could nearly wipe out the Fore in the 20th century, it's possible it could have also wiped out the Neanderthals millennia earlier [source: ABC].

Other sites have yielded evidence of anthropophagy. Archaeologists look for butcher marks, dents or scrapes in the bones made by sharp objects used to carve the meat from the bone. Butcher marks are proof positive that it was a human who removed the flesh from a bone, since we're the only species known to use tools in that manner. Kettle polish is another indicator that a human has cooked another human. These shiny marks come from a bone colliding against the inside walls of a metal cooking pot when boiled. Together or alone, kettle polish and butcher marks on human bones suggest cannibalism.

Suggest is the operative word, however. When examining ancient evidence of anthropophagy, there's ultimately one clear indicator that actual consumption of human flesh by another human has occurred; this evidence is found in the stool. Human muscle contains a unique protein called myoglobin that can survive cooking and eating. If myoglobin is present in human feces, the only explanation is that one human consumed, digested and excreted another human.

This very evidence was found in 1994 in Colorado at an Anasazi people cave site, dated around A.D. 1150. Coprolite, fossilized human feces, was discovered in the cave alongside a cooking pot with remnants of human tissue, bones bearing butcher marks and butcher tools stained with human blood [source: The New York Times]. The evidence of cannibalism provided by the Anasazi site is overwhelming; it is to archaeology what observing a person eating the flesh of another person is to anthropology. And yet, the researchers at the Colorado site are treating the evidence cautiously. An ancestry of cannibalism is a specter that science has learned to be reticent to cast over a people.