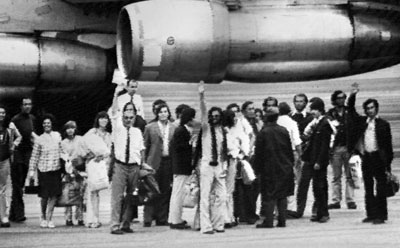 The 16 rescued survivors of the Andean plane crash. The people shown resorted to cannibalism to stay alive for 70 days.
AFP/Getty Images

Anthropologists divide anthropophagy into two broad categories, based on its context. One is learned cannibalism, also called customary anthropophagy. The other broad classification, survival cannibalism, is perhaps the most disturbing. Survival cannibalism isn't learned, it appears to be innate. It's also the one most easily forgiven in the minds of Westerners. And it's happened more commonly than civilized society would feel comfortable admitting.

The Donner Party is one striking example. In 1846, a group of Westward expansionists set out for California from the Iowa territory. A group of 89 settlers broke off from the original party, taking a shortcut through the Sierra Nevada Mountains. Stranded in the mountains by a harsh winter and faced with starvation, the group splintered again. As the weather grew worse, the original and expedition sections of the Donner Party depleted their food, their animals and eventually turned to cannibalism to survive.

Forty years later, four men on a yacht named the Mignonette sailing from England to Australia were stranded in a lifeboat after the yacht sank in the Atlantic. They remained adrift for more than two months and exhausted the meat of a sea turtle they'd captured. One of the men -- a sailor named Richard Parker -- drank seawater out of desperate thirst. As his health declined, his shipmates opted to kill and eat him rather than wait for the young man to die naturally. In an excruciating twist of irony, a sailor named Richard Parker was eaten by his fellow castaways after they'd eaten a tortoise in a 1838 Edgar Allen Poe short story, "The Narrative of Arthur Gordon Pym" [source: The New York Times].

In 1972, a group of 16 people, including members of a Uruguayan rugby team, faced a similar situation when a plane crash stranded them in the Andes Mountains in Chile. During their 70 days in the mountains, the surviving members of the team ate the flesh of others who died in the plane crash [source: Simpson].

Survival cannibalism has happened enough that by the 19th century, it was an unspoken fact of life in the event of a shipwreck. This, the custom of the sea, included general guidelines. Drawing lots (straws) was the traditional method of deciding who would be killed and eaten and who would carry out the killing. Usually, the person with the shortest straw died and the person with the next shortest straw was the killer [source: Salon].

Survival cannibalism is a last resort. In the case of one group adrift in a lifeboat, 116 days passed without food before the party turned to eating human flesh. In most cases, anything even remotely resembling food was first eaten. Dogs, candles, leather, shoes and blankets are all consumed first before cannibalism becomes the only recourse for survival.

Under these terrible circumstances, cannibalism seems like a logical step. It appears in Looney Tunes cartoons when characters find themselves in some other life-threatening situation. Suddenly, Bugs Bunny or Elmer Fudd notices a companion looks an awful lot like a nice, perfectly cooked porterhouse steak. As terrible as the thought is, it just makes sense. But Western society's willingness to forgive its members' consumption of human flesh in the direst of circumstances is in stark contrast to how the West views learned cannibalism.