Cannibalism as a Tool of Conquest and Exclusion 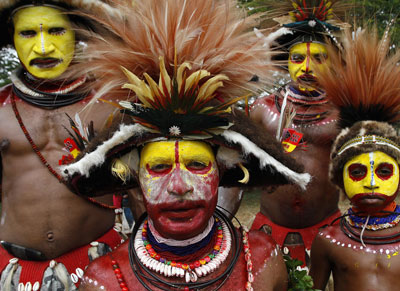 The Huli people of the Southern Highlands of Papua New Guinea have an oral tradition of the Baya Horo, a race of giants who feasted on human flesh and lived deep in prehistoric antiquity. As long as the Baya Horo existed, humans were forced to live in hiding and unable to thrive. Eventually, the race died out and humans emerged from caves to take their place in the world.

Curiously, the Huli aren't the only culture with a legend of a race of giant cannibals. Cultures in Europe, Asia, Africa and India have similar stories [source: Goldman]. These legends share another common thread in that a cannibal is considered a person to be feared and someone who exists outside the boundaries of human behavior.

Because we fear the concept of cannibalism, it becomes an easy tool for exploiting other cultures. When Columbus described the Carib indians as "sub-human eaters of men," he effectively placed the culture firmly below Europeans [source: Anguilla Guide]. Labeling a culture cannibalistic animalizes it, and, in the context of colonization, justifies murder and land-grabbing.

Forcibly taking over an area occupied by cannibals is comparable to building a house in the midst of an animal habitat. One feels justified in killing any animal that enters the home, although it's the human who's the interloper. With Europeans arriving in droves, in conjunction with Columbus' report that cannibals existed, the "new worlds" became the homes the Europeans built and the "cannibals" the animals they killed. The foundation was laid for centuries of genocide around the globe [source: The New York Times]. Throughout the world, cultures labeled cannibals by settlers faced near or total extinction in places like Australia, North America, the Pacific Islands and Africa.

Cannibalism also produces a sense of otherness. It explains why one culture is not like another or is less superior. The established Romans believed the Irish practiced anthropophagy; as recently as the 18th century, pagan Scots were considered cannibals by European Christians. Using cannibalism as a way to exclude one group continues today. A photo circulated on the Internet in 2001 showed a man eating a baby fetus, cited as the newest food craze in Asia. It took several years before the photo was revealed as part of an art exhibit. In the meantime, the photo titled, "Eating People," was taken seriously by outraged Westerners. In a globalizing world, the gulf of misunderstanding between the East and West was laid bare by the photo.

British society has traditionally been perhaps the most preoccupied with cannibalism [source: Biber]. The idea that other groups eat human flesh appears to be pancultural, however. Europeans aren't the only group to bandy about rumors of cannibalism among other cultures. When the Spaniards invaded Mesoamerica, the Aztecs assumed the conquistadors were anthropophages. The famed explorer and missionary Dr. David Livingstone found that some cultures he encountered during his travels in Africa in the 19th century believed the white men were cannibals [source: Livingstone].

These tribesmen weren't too far off the mark. Livingstone learned they presumed that Africans taken by whites were fattened and then consumed. It turned out they had mistaken the European slave trade for cannibalism, commoditization for consumption. At the time, genuine acts of cannibalism could be found in Europeans' recent past. During the Renaissance, consuming the powdered remains of mummies was a trendy form of health care.

Though it seems remote, even a far cry from eating the flesh of a recently deceased human being, this kind of practice qualifies as cannibalism. And practices that are cannibalistic in nature but remain sanctioned because they stand outside of a society's definition of anthropophagy exist in the West today. In fact, you may become a cannibal one day.