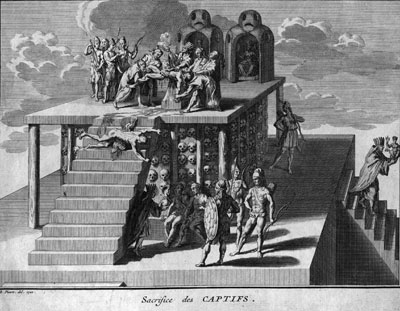 While the field of anthropology has identified different categories of cannibalism, it's still trying to fully understand the underlying behavior. The question remains, why did humans begin to eat one another? Anthropology is split on what basis to approach the concept. It's a chicken-or-the-egg dilemma: Was cannibalism generated out of necessity and adorned with a metaphysical rationale afterward, or did cannibalism arise from established ritual practices? Specifically, this argument is divided between two schools of thought in anthropology -- materialism and idealism.

The Aztec people are a good example of this dispute. Mesoamerica has long been cited as the setting for Precolumbian anthropophagy, and at the head of the pack were the Aztecs. Ritual sacrifice was a foundation of the Aztec civilization, and they were prolific killers. As many as a quarter of a million people (about one percent of the population) were sacrificed each year [source: Ortiz de Montellano]. They left behind ample physical and cultural evidence of their practice. Through sacrifice and the ensuing anthropophagy, both the consumer and the sacrificed person were eligible to go on to the afterlife. As a result, Aztec sacrificial victims were often willing ones. But did these beliefs stem from cannibalism or vice versa?

Materialists argue that ritualized cannibalism took shape after acts of survival cannibalism. A scarcity of food sources from a widespread and long-lasting drought in an area may have forced cultures to attack and eat one another. From a prolonged bout of survival cannibalism, a culture could seek to justify or support a practice their ancestors would have found abominable by framing it within the context of religion. With the Aztecs, this context was framed by feeding of the sun with blood through sacrifice and communing with a higher power through anthropophagy [source: Ortiz de Montellano]. By ritualizing the consumption of human flesh, it becomes something more than a meal; it becomes spiritual. As anthropologist Peggy Reeves Sanday wrote, "Cannibalism is never just about eating" [source: The New York Times].

Idealists agree, they just think that the reasons for ritualized cannibalism are far more esoteric than those posed by materialists. Rather than culture being shaped by its environment, idealists see humans as interpreting the world via symbols. For example, after death a mother's brain becomes symbolic of her wisdom. By identifying parts of the body as having mystical properties that can be transferred from one human to another through ingestion, the ritual aspect appears before the cannibalism.

Regardless of how cannibalism came to be associated with religion, the idea of eating the flesh of another person for spiritual purposes seems foreign and abhorrent to Westerners. But the concept comes barreling into perspective when one considers the Christian practice of communion, which simulates the consumption of Christ's flesh. This religious ritual simulates cannibalism, and it's widely accepted. The reason this simulated cannibalism is accepted is because it's understood.

This begs the question: Is the Western notion that ritual cannibalism existed in a literal form elsewhere in the world simply a misunderstanding? Is it possible that the accounts of early missionaries, soldiers and explorers were mistaken descriptions of rituals? This leads us to a third argument -- ritual cannibalism ever existed at all.