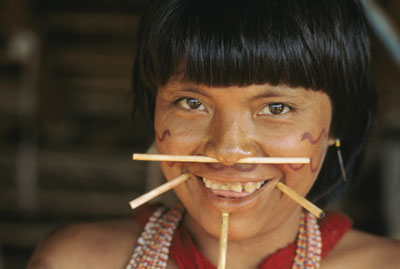 The Yanomamo tribes of Brazil and Venezuela are thought to have practiced endocannibalism by mixing the ashes of dead relatives with a plantain soup and consuming them.
Ed George/National Geographic/Getty Images

The category of anthropophagy called learned or customary cannibalism is virtually the opposite of survival cannibalism. It's the consumption of human flesh, most often in a ritualized manner under some socially sanctioned and even prescribed method. Learned cannibalism is behavior passed down from generation to generation (hence, learned behavior). It can be further subdivided into two main categories: endocannibalism and exocannibalism. (What Armin Meiwes and others like him committed is referred to as pathological anthropophagy, the consumption of human flesh as a course of insanity. It's generally considered outside the scope of anthropology.)

Endocannibalism is the consumption of the flesh of a person who is a member of the consumer's kin group. This membership can be based on family, society, culture, tribe -- any type of in-group. Endocannibalism is most often an expression of veneration of the dead, or the pursuit of consuming some esoteric aspect of the person, like the deceased's wisdom.

The Fore peoples of Papua New Guinea had a strongly codified type of endocannibalism as part of funerary rites. In this tribe, women and children played the largest role in cannibalism among deceased Fore males. The society allowed certain relations to eat certain parts of the deceased. A woman, for example, ate the brain of her dead brother. A sister-in-law ate the hands of her husband's dead brother or the buttocks, vulva and intestines of her dead sister-in-law [source: Lukaschek].

Endocannibalism can also take place in societies where anthropophagy isn't practiced. A chief of the West African Junkun tribe eats pieces of the hearts of the predecessors. In doing so, he actually maintains his place outside of the normalized society over which he rules; the Junkun aren't anthropophagic, and the practice is taboo. Nigerian Rukuba chiefs draw power by eating the flesh of an infant from their tribe. The Rukuba also don't practice anthropophagy [source: Coquet, et al].

An Amazon tribe, the Wari', practiced anthropophagy as a means of transforming their ancestors from humans into spirits during funeral rites. The spirit could then take animal form and provide food to descendants who hunted them. Anthropologist Beth Conklin, who lived with the Wari', found there was another basis for the group's endocannibalism. It was a means of addressing grief: The Wari' transformed their surroundings to rid themselves of memories of the deceased, and eating their dead was a way to extend this process [source: Salisbury].

Cannibalism isn't always a tender act, however. The Wari' also engaged in the consumption of the flesh of their enemies as well as their relatives [source: Salisbury]. Another type of learned cannibalism, exocannibalism, is often based on hatred, rage, disdain and humiliation.