The Cannibal in the Mirror 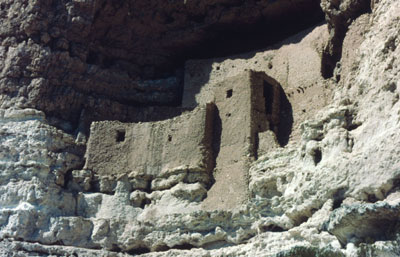 Anasazi sites like this one have yielded virtually definitive evidence of cannibalism.
MPI/Getty Images

The further one looks into cannibalism, the harder it is to see humans as anything more than animals. The question emerges: Why don't we eat one another? Anthropologist William Arens suggests it's simply bad strategy insofar as evolution goes. Since under evolutionary theory we're fueled by an innate desire to see our genes survive, eating one another is contradictory.

Arens' point is both undermined and supported by nature. Other species avoid cannibalism but will resort to the practice under certain circumstances. In the context of a crowded pen, chickens have resorted to cannibalism. More than 100 mammals, including chimps, polar bears and otters, have displayed cannibalism, usually of the survival variety [source: PBS].

This lends itself to a materialist approach to cannibalism among humans. While cannibalism is a poor long-term strategy for the survival of a species, it's an excellent short-term strategy for the survival of the individual. The materialist approach has gained ground over time. The Colorado Anasazi site suggests the cannibalism that occurred there took place during a long drought, that the members of the village were all killed during a single raid, and that the raid prompted a 50-year period of cannibalism among the Anasazi in the area. At this point, the drought ended and other food sources became available [source: National Geographic].

If materialists are right and ritualization of cannibalism emerged from necessity, then context played a role as well. Nutritional deficiency alone doesn't explain the Anasazi cannibalism to researchers familiar with the sites: "Violent social control … is an increasingly attractive idea," wrote two researchers [source: Turner and Turner]. Some societies showed a willingness to participate in anthropophagy in certain circumstances but absolutely not in others. One New Guinea tribe views cannibalism as "'an inhuman, ghoulish nightmare, or as a sacred, moral duty,' depending on context" [source: The New York Times].

This dichotomy isn't as strange as it seems. Western society contradicts itself in how it views cannibalism. While it abhors the consumption of human flesh, Western society sanctions organ transplants and blood transfusions. And in the Eastern Chinese society, the organs, skin and eyes of executed prisoners are sold for transplant operations [source: ABC]. Is there such a difference between masticating, swallowing and digesting the flesh of another human being in order to obtain the body's esoteric vitality for oneself and replacing a failing organ of our own with one from another human being?

And is the vitality one can obtain through consumption of human flesh really so esoteric? In fact, it's quite literal. While the concept of transferring wisdom or bravery through anthropophagy is in stark contrast to Western beliefs, survival cannibalism is testament to the vitality humans can gain by eating other humans. The human digestive system breaks down and absorbs nutrients from food. Meats, for example, provide vitamins, fats and proteins. All of these ingredients essential to life are found in meat -- human, bovine or otherwise.