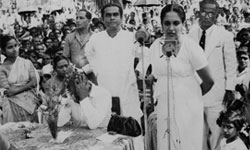 On July 20, 1960, Sirimavo Bandaranaike became prime minister of Sri Lanka, making her the first woman in the country -- and the world -- to be elected to that high-ranking seat. She'd taken over as president of the Sri Lankan Freedom Party after her prime minister husband was assassinated by a Buddhist monk in 1959. Nicknamed the "weeping widow," Bandaranaike earned a reputation -- and votes, eventually -- for tearful speeches on the campaign trail [source: BBC].

The first female prime minister served for 12 non-consecutive years and was reappointed in 1994 by her daughter Chandrika Kumaratunga, who had become Sri Lanka's president. By 1994, the prime minister position that Bandaranaike herself held was mostly ceremonial, but all told, the Bandaranaike political dynasty governed the South Asian country for 26 years. She died in 2000 [source: Dugger].