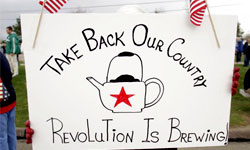 In 2018, a majority of Americans supported the entrance of a political third party to help govern.
Bill Pugliano/Getty Images

Every U.S. president elected to office since 1852 has belonged to one of two political parties: Republicans and Democrats. But polling data suggest that many people aren't satisfied with that either-or scenario in the voting booth. In 2018, a Gallup survey found that 57 percent of Americans supported the idea of a third party. Only 38 percent believed the current two-party system was doing an adequate job [source: Reinhart]. Nevertheless, the odds of that happening are slim, judging by third parties' collective legacy as flashes in the pan that glimmer every four years or so and quickly fade out.

Perhaps one of the best-known quotes about political third parties comes from deceased Columbia University professor and popular historian Richard Hofstadter: "Third parties are like bees. Once they have stung, they die" [source: Douthat]. Often functioning to highlight hot-button issues that major parties might not care to approach, third parties have successfully steered political discourse and lawmaking, yet largely haven't stuck around long enough to get their own candidates into office, particularly in the case of presidential elections. Nevertheless, a number of those who have attempted to reach the White House on third party tickets have persisted in public memory because, though ultimately unsuccessful, they attracted noteworthy proportions of popular votes. Not only that, the most successful third-party candidate in U.S. history is also largely responsible for the long-time reign of America's two-party political structure.