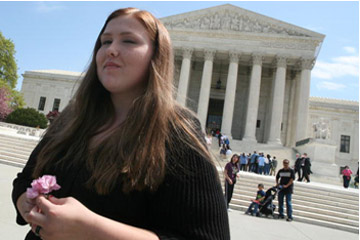 Savana Redding leaves the U.S. Supreme Court building after hearing arguments in the case she brought to the High Court in 2009. See pictures from civil rights history.
Mark Wilson/Getty Images

In October 2003, Safford Middle School assistant principal Kerry Wilson entered Savana Redding's math class and asked her to accompany him to his office. When they got there, Wilson showed the Arizona 13-year-old a day planner filled with a cigarette, lighters, knives and other contraband. She admitted that the planner belonged to her, but denied the other items. Wilson then showed Savana four prescription-strength ibuprofen tablets and one regular-strength naproxen tablet -- all legal, but banned by the school without advance permission. Savana denied knowing anything about the pills, but Wilson had heard otherwise. She agreed to allow Wilson and a school aide to search her belongings. They found nothing.

Apparently unsatisfied with his initial findings, Wilson ordered Savana to the nurse's office for a clothing search. The nurse and aide asked her to remove her jacket, socks and shoes, followed by her stretch pants and T-shirt. Finally, they made Savana move her underwear around, partially exposing herself in the process. They found nothing.

Savana's mother sued the school district and the adults who searched her daughter for violating her constitutional right to reject unreasonable searches and seizures, and the case made its way through the courts. On June 25, 2009 -- nearly six years after that fateful math class -- the U.S. Supreme Court ruled that the strip search was in fact unreasonable and violated her rights under the Fourth Amendment. But what shocked the masses was the fact that an authority figure had subjected a young girl to such treatment over a legal and generally harmless substance without proof. Had an adult done such a thing to anyone else in nearly any other venue, that adult could have faced criminal charges.

However, a school official could invade the privacy of multiple students in the most intimate of ways -- Wilson ordered a similar search on another student in the same case earlier in the day -- and face little consequence under the law. Although the Supreme Court ruled 8-1 that the search was unreasonable, the court declined to find the Safford Middle School officials liable for their actions [source: Dorf].

What separates students from adults or even other children? Do their rights as citizens end at the school doors? The Supreme Court has pondered the same questions for decades. Read on for a short history of student rights on the High Court.

Student Rights and the High Court

Under the law, children in the United States are fully formed human beings with the same basic rights that adults enjoy. However, it also recognizes that children aren't physically and emotionally mature enough to handle the responsibility attached to legal activities like driving a car, drinking, voting or running for office. To remedy that discrepancy, the law implements ages of majority to define the age at which a person can exercise that right responsibly. These usually vary by state, but they govern everything from the right to drive to the right to marry without parental intervention.

All that changes as soon as a child enters school property. The legal relationship between students and school officials is best described by the doctrines of in loco parentis ("school as parent") and parens patriae ("the state as parent"). The former, for example, gives school officials the right to stop any activity -- legal or otherwise -- that disrupts the learning process. The latter allows schools to act as agents of government on students' behalf. In tandem, the two concepts have allowed courts to regularly uphold violations of students' rights that wouldn't have flown otherwise. Although schools have made exceptions for certain forms of self-expression, they've also censored school newspapers and suspended students for infractions like using bad language on school grounds and wearing hair past certain lengths. Schools have even been allowed to search students' private property. The prevailing attitude was that a school's responsibility to educate and protect children trumps student privacy, and allows school authorities more leeway than the police would have outside school [source: Dorf].

One of the most famous student rights cases, however, involved the suppression of student speech outside school property. Juneau, Alaska, high school senior Joseph Frederick unfurled a sign promoting drug use as the Olympic Torch Relay passed by his high school before the 2002 Winter Olympic Games in Salt Lake City. He did so in full view of his principal, Deborah Morse. She had the sign taken down and Frederick suspended for violating the school's anti-drug policies. Frederick appealed his suspension all the way to the Supreme Court, but the court found that even though the incident took place outside of school and constituted an expression of free speech, signs like Frederick's "[pose] a particular challenge for school officials working to protect those entrusted to their care from the dangers of drug abuse." As Chief Justice John Roberts said in his opinion, "The First Amendment does not require schools to tolerate at school events student expression that contributes to those dangers" [source: Supreme Court of the United States].

For more information on students and the law, take a look at the links on the next page.