Crime and Punishment Inside Prisons 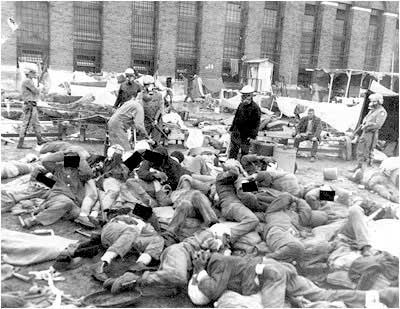 Inmates at Attica Correctional Facility are guarded by police officers, after helicopters dropped tear gas as part of the retaking effort.
Photo courtesy ©2007 The Rochester Democrat and Chronicle

While in prison, cons are subject to the rules set by prison officials. If a con commits an infraction, he gets a hearing before the warden or some lower ranking officials. If the committee finds the prisoner guilty of the infraction, penalties can be issued. Some examples of punishment:

Relatively minor infractions result in "shots." A shot is a mark against the prisoner, placed on his prison file. When the prisoner comes up for parole or requests permission for some kind of additional privilege (like a better prison job or a work release program), the number of shots on his record will be considered.

There are more informal punishments as well. Guards can mete out discipline without any hearing in many circumstances. A common tactic is to ransack the prisoner's cell searching for contraband, possibly damaging some of the inmate's possessions. If any contraband is found, the inmate will be in even more trouble. Guards can also use physical force on inmates who disobey direct orders. It is not uncommon for guards to fire shotguns at prisoners whenever they see any commotion.

Serious crimes that occur in prison, such as murder or assault, can result in charges being pressed and a full trial.

Not everyone in a prison is a psychopathic murderer, but in maximum security prisons, a larger percentage of the inmates are violent offenders -- people who are willing to use violence to get what they want. Prisoners often maintain a "might makes right" philosophy. Inmates who show cowardice or fail to stand up to threats are quickly marked as pushovers and forced to run errands and provide contraband for other prisoners. They may also be beaten or abused.

When a beating or even a murder happens in prison, there are rarely any witnesses. Cons have a strict rule against "snitching," so even a murder in a crowded prison yard can go unsolved. This rule isn't upheld by any sense of honor -- snitches are repaid by swift, violent retribution. Other inmates often learn quickly to keep their mouths shut, no matter what they saw.

Prisoners outnumber guards in prisons. If the prisoners rise up violently, they may gain control of sections of the prison (or even the whole prison), take guards hostage and capture weapons. Many inmates take advantage of the momentary lawlessness to commit violence against other prisoners. In some cases, the prisoners have a genuine grievance because of poor conditions in the prison.

The most notorious prison riot in U.S. history is the Attica Riot of 1971. Inmates complained of deplorable conditions at Attica Correctional Facility in Attica, New York, but were ignored. They assaulted a guard and took over most of the prison, attempting to negotiate for better conditions. Eventually, state and local police stormed the prison. In the riot and the retaking of the prison, 39 guards and prisoners were killed.

In 1980, the New Mexico State Penitentiary near Santa Fe was the scene of a brutal uprising. While no guards were killed, seven were severely beaten and 33 inmates were killed. Some of the inmate killings were reportedly the result of torture.

We'll look at some more of the controversies associated with prisons in the next section.