Life in a Prison Cell 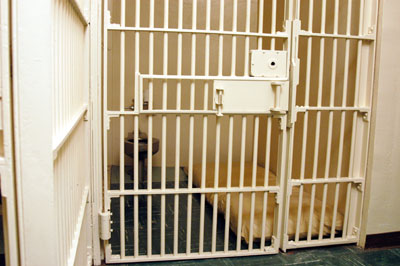 ­When a person is first arrested and placed in jail awaiting bail, there usually isn't much processing beyond a search for weapons. Someone who has been convicte­d and sentenced faces a longer and more extensive procedure when they arrive at the prison where they will be spending the next few months, years or decades.

New arrivals can be dropped off by taxi, or by a friend or relative. The other option is to be picked up at the local sheriff's headquarters by the prison bus. The bus, which is generally uncomfortable, will make quite a few stops at other police departments and prisons, picking up and dropping off convicts. Cons refer to this as a diesel tour.

Once the new convicts arrive at their home prison, they are usually stripped, disinfected and subjected to a very thorough inspection to make sure they aren't smuggling anything into the prison. Their possessions are catalogued and boxed up -- convicts are allowed to bring in little from the outside. Usually not much more than eye glasses, a few books and their legal papers are allowed. State prisons may be a bit more lenient than federal prisons in this regard.

­Cons (and often guards) usually refer to new arrivals as fish. Some portions of the initial processing may take place in full view of other prisoners in their cells, in a special section of the prison reserved for new cons -- this is known as the fish tank. Prisoners are held here for at least 30 days while prison officials process their paperwork, find room for them in the prison and possibly assign a prison job to them. The vast majority of the menial labor performed in prisons, including laundry, maintenance,janitorial services, cooking and landscaping are performed by the prisoners for as little as 10 cents an hour.

The typical prison cell is eight by six feet (about 2.5 by 1.8 meters), with a metal bed tray (either bolted to the wall or free-standing on metal legs), a sink and a toilet. There may be a window allowing a view outside the prison. Prison overcrowding has forced most prisons to keep two prisoners in each cell, so an additional metal bunk is placed above the bed. In severe cases, three prisoners have been placed in a cell. A few cell blocks have a dormitory set-up, with eight or more prisoners in a larger cell with multiple bunks, but this is uncommon.

The typical maximum security prison is divided into wings or blocks, each of which has its own staff and can be sealed off from the rest of the prison. A block may have multiple tiers. The cells are arranged around an open central space that contains a security booth, a kiosk protected by metal mesh and glass for a clerk/guard who keeps an eye on the prisoners. Additional armed guards may be positioned in glassed-off cubicles (bubbles) in observation posts within each cell block. Guards who come into contact with prisoners usually do not carry a firearm because a prisoner could steal it.

In general population cell blocks (cell blocks other than the fish tank and the maxium-security unit), the prisoners are allowed to roam outside their cells most of the time. They can walk around the cell block to visit other prisoners in their cells or go outside to the prison yard, a large area used for exercise and socializing. The yard is watched by armed guards in towers high above.

At various times throughout the day, the guards conduct counts. During a count, all prisoners must stand in front of their cells while the guards do a head count to make sure no one is missing or in a place where they aren't supposed to be. If a prisoner is in the wrong place and doesn't make it to his cell for the count on time, he will face disciplinary action. Counts are conducted at regular intervals at the same time every day. There are counts in the middle of the night as well, but for those, the prisoners can usually stay in their beds while the guards count them from outside the cell.

We'll look at commerce inside the prison and prisoner contact with the outside world in the next section.

Working in a Prison

Administrative positions in prisons, such as warden, require college degrees, usually in Criminal Justice. There are also legal and public relations jobs in prison administration. The primary prison workforce (other than the inmates) comprises corrections officers.

A corrections officer needs a minimum of a high school education, must not have any criminal convictions on his or her record and often must take a civil service exam to qualify for the job. A one or two month training course helps prepare them. The remaining prison jobs are filled by medical personnel, maintenance workers and sometimes, educators.