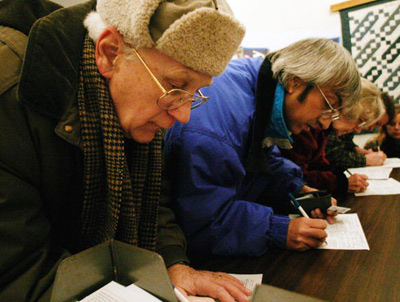 In spirit, a primary consists of individuals casting a vote in favor of their preferred candidate. This means that voters have something candidates want: votes. So primaries are a way of forcing candidates to interact with voters. But votes don't go directly to a candidate; instead they come in the form of delegates.

The use of delegates is problematic to some. While delegates are meant to be committed to a single candidate, they aren't bound by law to do so since political parties are private organizations. So a vote cast by a citizen may not go to the chosen candidate at all, if the delegate breaks from his or her obligation. The presence of superdelegates in the primary system – delegates who possess a vote but are beholden to no voter – also make some critics nervous. A standard delegate represents a large amount of voters; superdelegates are equal to one massive vote for an individual.

Another problem with the primaries is that the schedule is considered unfair by many states. Iowa has maintained its first-in-the-nation status since 1972, holding its caucus before any other preferential election. New Hampshire follows second, holding the first primary in the nation, as mandated by that state's laws. Both of these states have been allowed to maintain their position in the primary schedule by both parties, prompting allegations of unfair treatment by other states.

The political parties set the schedule for the primaries during an election cycle. The states may choose to ignore that schedule, however. In 2008, Michigan, South Carolina, Florida and Nevada all moved their primaries to dates before the official earliest date the Democratic Party had scheduled. In response, the party threatened not to count the votes of some of the offending states, effectively rendering the votes cast by residents totally useless. The states, in turn, threatened to sue the party.

A state ultimately decides whether it will hold presidential primaries. After all, it's generally the state that pays to hold the primaries for the parties, and since it's the state's dime, it's the state's decision. But choosing not to hold a primary is not generally a popular move. Kansas came under heavy criticism in 2008 for opting out of the presidential primaries to save $2 million. In response, both the Democratic and Republican parties held caucuses in the state on their own [source: Kansas City Star].

Other states may choose to follow party rules and observe the earliest date states can hold their primaries. In the 2020 election, 14 states will hold primaries on the earliest date – March 3, referred to as Super Tuesday. To critics of the primary system, this frontloading of the schedule resulted in an unfair shift of power away from states that chose to hold their primaries later. In other words, with so many delegates up for grabs early on, states with later primary dates can lose importance. This criticism will likely increase as California has moved its primary date from June to Super Tuesday. With very populous states like California and Texas both voting on this date, the Democratic candidate for president may well be decided on March 3 (the Republican candidate is the incumbent Donald Trump).

As the debate over the value of the U.S. presidential primaries has evolved, so, too, have suggestions for solving any problems with the system. One suggestion for reforming presidential primaries is a rotating schedule, with states taking turns at the head of the pack. Other suggestions include a national primary day, with all states voting on the same date; picking a new state to hold the first primary and having all the smaller states vote first. Naturally there are pros and cons with each approach [source: Kurtzleben].