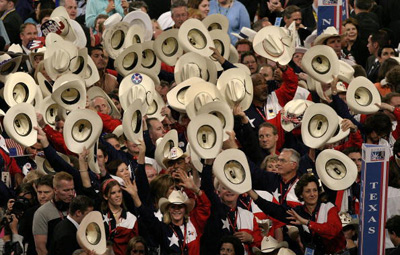 The goal of the primaries is to choose the party's candidate for president. In order for a candidate to receive the nomination, he or she has to win delegates. There are generally two ways to win delegates in primaries. In some cases candidates win by proportion. If a state has 100 delegates and a candidate wins 60 percent of the vote in the state's primary, then that candidate will have 60 delegates from that state at the national convention – the party nomination night. Other states use the winner-takes-all method. This sounds exactly like what it is: A candidate who wins the majority of the vote in a primary – 51 percent – wins all of that state's delegates.

Some favor the proportional method because it closely reflects the feelings of a state's voters. Others favor winner-takes-all, because it keeps primaries competitive by allowing candidates to come from behind with huge gains in key states.

When a candidate wins delegates in a state – either by proportion of votes or winner-takes-all – those delegates are presumed to be committed to voting for that candidate at the convention. Each party has a finite number of delegates who are up for grabs in the primaries. In 2020, the Republican Party had around 2,552 delegates; Democrats offered 4,750 delegates [source: The Green Papers].

To win his or her party's nomination in the presidential race, a candidate must accrue the majority of the delegates. This can be as narrow a victory as just one delegate. A tie may result in more rounds of voting, and the numbers can easily change; a delegate is usually allowed to change his or her vote after the first round of voting.

Delegates are usually people who are involved in their state's politics. They may be volunteers, local party chairs or other interested citizens. In addition to delegates, states also offer uncommitted delegates. These people – sometimes called superdelegates – are usually elected officials from the state.

Superdelegates can pledge their votes without regard to primaries or caucuses – for example, after being courted by a candidate – or they can remain uncommitted until voting begins at the national convention. While standard delegates chosen by votes from ordinary voters are important, superdelegates have a lot of influence as well. In the 2020 primaries, the Democrats will have 771 superdelegates, a sizeable number considering that to win the nomination a Democratic candidate needed 2,375 delegates voting in their favor [source: Ballotpedia].

Primary seasons usually start with several candidates. Ordinarily, candidates drop out of the race after poor showings as the season wears on. So what happens when a candidate drops out after having won some delegates? This is actually a little murky. Ostensibly, the delegates go to the national convention uncommitted, like superdelegates. There, they should be allowed to vote however they choose.

These delegates may also be folded into another candidate's delegates. If a candidate drops out of the race, he or she may endorse a rival candidate in the same party. Once this happens, the delegates formerly belonging to the candidate may pledge to the endorsed one.

By now you surely see how complex the primary system can be. This is both good and bad, depending on your perception of primaries. Read about some of the problems with primaries – and how to fix them – on the next page.