A child being kidnapped is a parent's worst nightmare. However, it is a reality that thousands of parents must face each year. In the United States, nearly 800,000 children are reported missing each year, or about 2,000 per day, according to the U.S. Department of Justice's Office of Juvenile Justice and Delinquency Prevention. Approximately one-third of the children reported missing have been kidnapped, and about one-fifth of those kidnapped children have been taken by nonfamily members.

­In response to this tragic problem, many states have established a missing-child response network, commonly called AMBER, which is used to notify the public when a child is abducted. AMBER (America's Missing: Broadcast Emergency Response) is a program that comprises law enforcement, radio and television media, and a network of electronic highway signs.

In this article, you will learn how this program was developed, how it is used in the recovery of missing children, and about the new legislation that is making AMBER a national program.

­ The AMBER Alert is a lasting tribute to a young girl from Arlington, Texas, who was kidnapped and later killed in 1996. Amber Hagerman, who was 9 years old at the time, was riding her bike when a neighbor heard a scream. The neighbor ran out and saw a man pull Amber off of her bike, throw her into the front seat of his truck and drive away.

Four days later, Amber's body was found in a drainage ditch 4 miles from her house. Her kidnapping and murder remain unsolved.

Amber's death provoked an outcry in the Dallas/Fort Worth area, which prompted the Dallas/Fort Worth Association of Radio Managers to implement a method of quickly alerting the public, media, and police when a child is kidnapped. That plan, which was the original AMBER Alert plan, called for alerts to be broadcast whenever a child was abducted. In July 1997, radio stations began broadcasting the alerts. Television stations began announcing the alerts in 1999.

Getting the Word Out

The impetus behind AMBER and other plans like it is the need to rescue a child in the first few hours after abduction. Officials say that these are critical hours: Each hour that passes gives the abductor an opportunity to take the child farther from home, and gives the abductor more time to harm the child. According to a study by the U.S. Department of Justice, 74 percent of children who are abducted and later found murdered were murdered in the first few hours after being taken.

There are more than 90 state and local plans, and each is slightly different, but here is how a typical plan works:

If the plan works, the public phones in tips to law enforcement, and in a best-case scenario the information leads to the recovery of the child.

Amber Hagerman's mother was at the White House to witness the new law being signed by President Bush.

It is important to expand the Amber Alert systems so police and sheriffs' departments gain thousands or even millions of allies in the search for missing children," President Bush said moments before signing the new legislation. "Every person who would think of abducting a child can know that a wide net will be cast. They may be found by a police cruiser, or by the car right next to them on a highway. These criminals can know that any driver they pass could be the one that spots them and brings them to justice.

The law as it related to the AMBER Alert plan provided for the following: 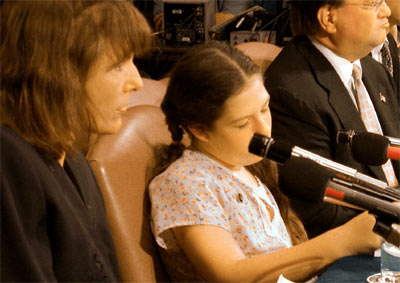 For more information on AMBER Alert and related topics, check out the links on the next page.

How the NSA Works
Top 10 American Political Dynasties
Test Your Knowledge of U.S. Presidential Elections With This Quiz!