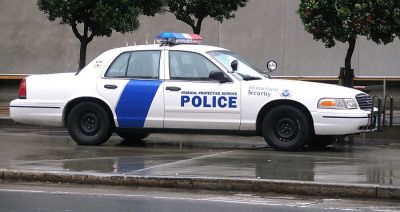 The main piece of equipment that a police officer relies in a pursuit is the police car. Modern police cars are special "police interceptor" versions of large sedans made specifically for police work by auto manufacturers. The most common police car in production today is the Ford Crown Victoria, although police officers also use Chevrolet Impalas, Chevy Tahoe SUVs, Dodge Intrepids, and Jeep Cherokees. The Italian police even use a Lamborghini.

There are quite a few differences between a police car and the civilian version of the same car. Police departments often opt for higher horsepower engines, not only because police cars weigh more, but for the acceleration and speed needed to catch up to criminals in a high-speed pursuit. Police cars receive harsh treatment on a daily basis, idling for a long time and then roaring off at high speed. To cope with the extra heat, transmission coolers and oil coolers supplement heavy-duty radiators. Alternators in police cars can crank out up to 130 amps to run lights, sirens, radios and other equipment [ref]. There are other differences related to suspect transport, such as metal reinforced seat backs (to prevent stabbings from behind) and vinyl covered bench rear seats for easy cleanup.

Flashing lights and loud sirens alert civilians that a police car is coming at high speed. The lights evolved from taillights in the 1930s, and were originally mounted on fenders. By the mid-70s, roof-mounted lights of varying colors were placed within an aerodynamic enclosed light bar [ref].

There are several systems that police can deploy ahead of a chase to disable the fleeing vehicle. The most common are spikes that puncture and deflate the tires. These are generally mounted on a bar or flexible cable, and deployed across the road. Models available include the Magnum Spike, Stop Sticks and the Stinger.

A method often seen in movies that police actually use is the police roadblock. By parking several cars across the road, or using some other form of barrier, police can slow or stop a criminal involved in a chase. Even if the suspect avoids the roadblock, it usually diverts their course or forces them off road, where they can't drive as fast and their car might be damaged.

More elaborate (and often experimental) systems try to disable the car's electrical system. The High Speed Avoidance Using Laser Technology (HALT) system would allow officers to cut the fuel supply to the engine by simply firing a laser at the car, gradually slowing it. Only vehicles equipped with a special microchip could be disabled, however [ref]. Another company is developing a microwave gun that would overload the electrical systems and computers in a car.

If officers have air support, they don't even need to stay within sight of a fleeing suspect. Police helicopters can maintain visual contact at greater speeds and without having to worry about terrain or road conditions. When equipped with infrared or night vision cameras, they can even carry on a pursuit at night or through heavy undergrowth.

In the next section, we'll follow a police pursuit and learn about the decisions involved.

The Ford Crown Victoria is one of the most widely produced and used police cruisers in the United States. For years, police departments considered it a worthy successor to the Chevrolet Caprice. However, a design flaw causes Crown Victorias to explode when struck forcefully from behind [ref]. These explosions have killed several police officers and bystanders. In response, Ford has created a chemical fire suppression system that activates automatically in the event of a high-speed rear collision. Nevertheless, many police forces throughout the nation are moving away from the Crown Victoria as their primary cruiser.