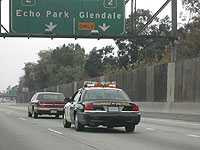 A police car pursuing a motorist.
This motorist's crime must have been severe, as the first car continued the chase and called for backup.
Photos courtesy Ken Wilson

Let's examine the various decisions that an officer has to make when starting, engaging in and finishing a pursuit. Suppose an officer is patrolling a highway when he spots a car passing him at faster than the posted speed limit. He accelerates and tails the car, but doesn't turn on his lights and sirens yet. He uses his radio to call in the license plate numbers and find out if the car is stolen or if there are warrants out for the owner. Once he gets this information, he hits the lights and sirens to pull the driver over for speeding. At this point, the driver speeds up, trying to escape.

The police officer has an important decision to make -- should he pursue or not? He must consider many factors when making this decision. The most important is the nature of the crime. If the car's tag came back clean, then a pursuit would probably not be justified. But if a report came back that the car was stolen at gunpoint, or had been used in an armed robbery, then the officer would have reason to believe the driver posed a serious danger and needed to be stopped.

He would also consider road conditions. If the owner of the car is wanted for tax evasion, he or she doesn't pose an immediate danger, but should still be arrested. On a clear day with little traffic, a pursuit could be justified. On a rainy night when the streets are clogged with traffic, or in the afternoon when school buses are dropping off children, he might have decided that it was not worth the risk.

This chase included a standoff between several police officers and a motorist.
Photo courtesy Ken Wilson

Department policy comes into effect in making a pursuit decision. For example, departments in the Des Moines, IA area must limit "the number of police cars chasing a suspect car to three, regardless of the number of agencies involved. Officers also must take into account the time of day, road and weather conditions, and the nature of the offense. A supervisor must approve continuation of a pursuit" [ref]. In Washington D.C., pursuit is justified only if the suspect has engaged in a violent act or "someone could be seriously hurt if the suspect was allowed to escape" [ref]. Orange County, FL has one of the most restrictive pursuit policies in the United States. In the year following enactment of that policy (2005), felonies in Orlando declined compared to the previous year [ref]. Officers will typically stay in radio contact with a supervisor throughout the chase, keeping the supervisor apprised of the situation. If it gets too risky, the supervisor can call off the chase. It's important that someone not directly involved in the chase make these decisions, since they can keep a cooler head and be more objective.

The use of spike strips and roadblocks offer some possibilities for ending chases safely, but officers often rely on something known as the Pursuit Intervention Technique, or PIT (also called Tactical Vehicle Intervention). The Pursuit Intervention Technique is a method of striking the fleeing vehicle in the rear corner, just behind the rear wheel. This will put the car into a spin from which the suspect will not be able to recover [ref]. However, this is a potentially dangerous move, since it makes the suspect lose control. The road must be clear of traffic and the surrounding area clear of pedestrians before an officer can safely pull off a PIT maneuver.

It is very rare for police officers to try to shoot out a fleeing suspect's tires, or to shoot at a moving vehicle at all. The risk of accidentally shooting a bystander is too great. Shooting out the tires is a last resort, if all other attempts to disable the vehicle have failed.

Once an officer disables the vehicle, the suspect may flee on foot, or he or she might be incapacitated. At this point, an officer's suspect apprehension training takes over.

In the next section, we'll explore the legal ramifications of a police chase.

Police chases are often recorded by television news helicopters or by cameras on-board the police cars themselves. Shows such as "World's Wildest Police Videos" depict many police procedures, including the PIT maneuver, use of spikes and the apprehension of the suspect. However, these programs do not always present a balanced, realistic view of police chases. Their creators usually sanitize them, and the narration usually depicts law enforcement officials in a positive light at all times. They rarely take issue with an officer's decision to pursue over a minor infraction, show chases in which civilians are injured or killed and rarely show officers backing off a pursuit that was becoming too dangerous.