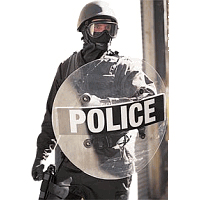 On April 29, 1992, a jury announced a not-guilty verdict for four white police officers who were videotaped beating Rodney King, a black man, in Los Angeles, CA. Within hours, protests and demonstrations turned violent, and by 8 p.m. that night, full-scale riots had broken out and were spreading throughout Los Angeles.

­Fires, looting, shootings and beatings raged though the city until May 2, when the presence of the U.S. National Guard, Marines and other federal troops combined with public pleas from politicians, store-owners and even Rodney King himself quelled the violence. In the end, 54 people were killed, and more than 2,300 were injured. More than 7,000 fires, along with window smashing, looting and attacks on vehicles resulted in an estimated $1 billion in damage. Los Angeles city courts were backed up for months dealing with the more than 12,000 arrests that resulted from the riots.

Today's police forces are better equipped and better trained to deal with crowds that get out of control. In this article, we'll learn what causes riots, how police units approach crowd control problems and what equipment they use to clear the streets safely.

What Makes a Riot?

To understand how police control riots, first we need to understand how a riot gets started in the first place. A riot is a crowd that takes violent, illegal actions, reacting out of fear or anger. The crowd takes on a mob mentality -- the people making up the "mob" do things they normally would not do because the crowd makes them anonymous; this anonymity, combined with the actions of the rest of the crowd, makes them feel like they can smash, burn or beat whatever and whomever they want.

There are different kinds of riots, but almost all riots can be described in general terms as being like a fire. For a fire to start, two things are needed: fuel and a spark.

The fuel for a riot builds up over time. In many riots, the fuel can be years or even decades of racial prejudice, unfair treatment of the poor or antagonism between a company and a union. If people have no effective way of dealing with these problems or changing their situation, an undercurrent of anger and frustration grows stronger and stronger.

Once the fuel has built up, almost any spark can set it off. An incident that angers one group can turn them against another group. In many cases, an actual incident isn't even required -- just a rumor can spread through a group and turn deep-seeded anger into a violent outburst.

Some riots are centered on sports teams either losing or winning major games or championships. In this case, the fuel doesn't build up for a long time -- it's mostly the result of alcohol. The drunkenness of the crowd contributes heavily to these riots, s­parked by the excitement or disappointment of a team's performance.

In June 1943, racial tension was close to the boiling point in Detroit, Michigan. Following a race-related fight at an amusement park, false rumors whipped both blacks and whites into a murderous rage. In the black community, the word was that some white men had thrown a black woman who was holding a baby into a lake. Whites repeated news that a mob of blacks had assaulted a white woman.

There was no truth to either of the rumors, but angry mobs formed downtown, attacking anyone who didn't have the same color skin as their own. White police officers soon joined the rioters. There were reports that officers shot fleeing blacks in the back and brutally clubbed innocent onlookers. Once federal troops took control, the toll was tallied: 25 blacks and nine whites dead, with $2 million in property damage.